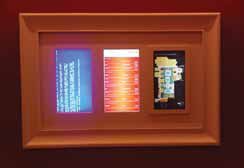 By the time PC-based digital signage users realized that the February 2010 Microsoft security updates were causing their PCs to crash, it was already too late. Their PCs were plagued with the dreaded “blue screen of death” and rolling reboots, causing the digital signs they were using to deliver targeted messages to completely shut down.

This was a unique situation, but the blue screen of death errors, the most serious errors Windows can encounter, can also be caused by a temperature problem, a timing error, a resource conflict, hardware failure, a corrupt registry, a virus, a device compatibility problem, or a driver error. Unfortunately, tracking down the error and fixing it so the digital signs are operating again can be very time-consuming.

Organizations that want the benefits of solid-state digital signage, but have limited budgets, should compare the additional savings and convenience of the various turnkey (hardware and software) solutions that are available.

Disasters like these can be avoided by using solid-state digital signage controllers instead of PC-based players. Designed to drive standalone or networked displays, these media players completely eliminate PC issues such as system crashes, the need to reboot and exposure to crippling viruses because they don’t run on Windows operating systems and instead run on a slim, robust operating system designed specifically for running digital signage instead of a suite of PC applications unrelated to digital signage. They also have no moving parts to fail and are much more environmentally friendly as the amount of power required is usually about three to five watts versus 70 to 90 watts for an average PC. The simplicity of solid-state media players that plug directly into the display also makes them easier to install directly next to or near a display and use due to their simple software and interface. And, more importantly, they deliver higher reliability and networking support for remote updates at significantly lower prices than PC-based solutions.

Organizations that want the benefits of solid-state digital signage, but have limited budgets should compare the additional savings and convenience of the various turnkey (hardware and software) solutions that are available. Today, there are affordably priced, end-to-end solutions for businesses and organizations to economically showcase a product, demonstrating it in use or providing entertaining information on flat-screen or HD displays— all with no hidden fees.

For example, with BrightSign’s all-in-one approach, rather than offering fully loaded models with features that may not be necessary for all applications, each model is a complete solution that delivers full HD quality with specific features, so customers only pay for the capabilities they need. As the user’s needs change, the digital signage displays can be upgraded from a simple, single- screen implementation that can be operated with a removable flash card, to a multi-screen, multi-site managed installation that can be updated over the internet.

Companies that are looking to add a digital signage solution or replace their vulnerable PC-based system should be aware that many digital sign players do not include software. When the software is included, users don’t have to worry about the added cost of site licenses or hardware/software compatibility issues. Potential buyers should also compare software features and ease of use. Today, there are applications that feature intuitive templates and tools to make creating, updating, managing and monitoring digital signage displays so easy even non-technical users don’t need an IT person to assist them.

Solid-state media players that include all of the tools needed for a wide range of digital signage applications simplify system upgrades and offer increased display flexibility.

In addition to all of the other benefits solid-state digital media players offer, they provide a much lower carbon footprint than PC-based systems. This is a win-win attribute in that it saves money while being good for the environment. And, because they don’t rely on a PC hard drive, they are fanless, which means they not only save energy, they eliminate the distracting noise of a spinning fan.

The blue screen of death shuts down a Windowsbased digital display.

With affordable solid-state digital media players that can be managed and updated by employees with no technical training, organizations of all sizes can enhance customer, visitor, or employee experiences in a wide range of applications.

Retail stores, fast-food restaurants, museums, hotels, sporting events, tradeshows, banks, medical facilities, airports, conference rooms, and educators can bring their messages to life without worrying about the added costs of PC-based systems and all of the problems they carry with them.

Features To Look For In Media Player Systems

Jeff Hastings is CEO of BrightSign.