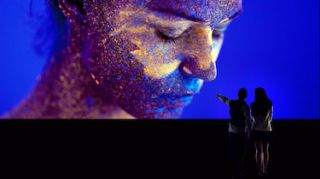 At InfoComm 2016, Sony will show a new large-scale video display solution, called “Canvas,” which the company anticipates will transform the large-display market to the same degree as Jumbotron technology did 30 years ago.

“We refer to it as ‘Canvas,’ principally because it really is more like a canvas than it is a video screen; it’s a new palette on which to paint, from a creativity standpoint,” said Kevin O’Connor, national sales and business development manager at Sony Electronics Professional Solutions of America. “It’s unbelievable to see, it’s immersive in its field, and it’s a technology that we’re certainly very excited about. At InfoComm, we’ll showcase this in a very large and spectacular manner at our booth.”

Canvas consists of 18-by-16-inch panels covered in “ultrafine LED” pixels that are only about 1/100th the size of those found in conventional LED walls, measuring just 0.003 square millimeters in size—about the size of a pin point. The minute size of the pixels enables the panel’s surface to be more than 99 percent black, which is a benefit for contrast in bright conditions, as well as for the seamless combination of units into a wall that “becomes almost monolithic in nature,” according to O’Connor.

A 32-by-9-foot Canvas wall will adorn the entryway to Sony’s InfoComm booth in a manner that invites visitors to scrutinize it closely, O’Connor said. “You’ll see on the show floor, there won’t be any barrier that keeps people away from this thing. We want you to get up close and see it; we want you to look as close as you can to see if you can see that micro LED, that pixel that’s there.”

With a brightness of 1,000 nits, support for HDR content, and a 179-degree viewing angle, the technology is designed for a range of commercial applications and immersive experiences, from theme parks, museums, and high-traffic lobbies to corporate boardrooms, broadcast studios, and industrial product design and manufacturing—any environment requiring intricately detailed video displays and realistic simulation on a large scale.

“We feel that it’s something that will have people stopping; it’s almost breathtaking,” O’Connor said.

The Canvas technology with display controller is planned to be shipping around the end of 2016 or January 2017.