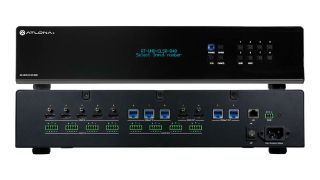 The What: Adding a new member at the top of its line of commercial market AV matrix switchers, Atlona introduced the AT-UHD-CLSO-840, an eight-input, four-output 4K HDMI and HDBaseT switcher designed for applications including videoconferencing, multi-screen presentations, and divisible room installations often specified for classroom, corporate, or hospitality environments.

The What Else: The new matrix is equipped with five HDMI and three HDBaseT inputs, two HDMI outputs, and two HDBaseT outputs. Its audio capabilities include an independent 8x4 audio matrix using audio de-embedded from the video sources with matrix switching to four balanced, analog audio outputs. There are also four analog audio inputs, each dedicated to embedding content onto a corresponding video output.

“The CLSO-840 is our response to many partner and integrator requests for a powerful, four-output 4K matrix needed in videoconferencing, distance learning, and training rooms,” said Steve Kolta, product manager at Atlona. “At the same time, we made integrating complex video matrix systems easy by creating a matrix that works with our HDVS-200 and UHD-EX Series for remote input switching and HDBaseT extension.”

The new matrix includes a LAN connection for IP-based control, including configuration and monitoring via Atlona Management System (AMS) software, available to customers via free download. It can extend ethernet from a control processor, and features IP to RS-232 translation for converting TCP/IP commands to RS-232. This provides the flexibility of extending TCP/IP or RS-232 control to remote devices over HDBaseT.

The Bottom Line: The AT-UHD-CLSO-840 is envisioned for use in a variety of meeting room settings, such as videoconferencing suites requiring at least three independent outputs for connections to displays and a conferencing codec. It is rack mountable in a 2U rack space, and will be available in Q1 2017 at a suggested retail price of $4,999.99.