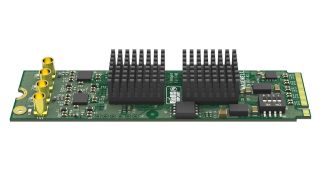 "The Eco Capture family enables OEM developers to incorporate Magewell's renowned capture quality and reliability into smaller products with lower power consumption, and customer feedback on the product line has been very positive since its introduction," said James Liu, VP of engineering at Magewell. "We are excited to now be shipping the first Eco Capture model, and we will continue to develop additional new configurations in response to OEM customer needs."

The M.2 Eco Capture models are available with drivers for Windows and Linux operating systems. OS-native capture APIs including DirectShow, DirectKS, V4L2, and ALSA are supported, and a comprehensive SDK enables developers to directly access the full feature set of the cards.

The Bottom Line: Designed for use in small and embedded systems where full-sized PCIe slots are not available, the Eco Capture family complements Magewell's flagship Pro Capture series by offering OEM customers a robust capture solution with low power consumption for space-limited applications.