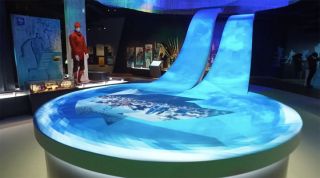 Until relatively recently, museums– especially art museums– have been slow to experiment with digital technology to create more immersive, memorable, and collaborative experiences for their visitors. Museums are made memorable not just by the knowledge they impart, but by how that knowledge is presented and made interesting to the many generations that come through their doors. In today’s museum landscape that increasingly involves interactive AV and digital signage. The recently opened Norwegian Olympic Museum in Lillehammer is a great showcase for adventurous video installations, curated exhibits of cultural and historic artefacts and Olympic memorabilia– and features some new generation pixel mapping. Officially opened by none other than the H.M Queen of Norway at a ceremony last February, the Museum’s technology centerpiece is the Lysgaardsbakkene– roughly translated as "Jump Hills”. The exhibit is made up of a large-scale circular raised-platform interactive model measuring 3.5 meters in diameter, depicting the Olympic jump hills. Local systems integrator Bright Norway achieved an interactive presentation with pixel mapping, using AV Stumpfl Wings Engine Raw uncompressed 4K media servers and Wings VIOSO calibration software to manage and warp native video content across 4 edge-blended projectors.

Bright Norway was also responsible for multimedia and presentation equipment for large-scale video projections throughout the Museum. All multimedia content was created by Centre Screen, London and all exhibit areas designed by Mather & Co.

Elsewhere in the Museum, a large-scale 5.5-meter wide by 1.5 meter high AV wall display shows 2D animations of the Ancient Games. Furthermore a 6.8-meter wide by 1.5 meter high panoramic wall celebrates the opening ceremonies, and one of the celebrated showcases from the Olympic Museum in Lausanne, the spectacular Inside the Race, is projected onto a curved wall surface measuring 14.5-meters wide by 2.7 meters high. Again Wings VIOSO software was used here to blend and align all projectors.

Tobias Stumpfl, CEO of AV Stumpfl, said: “We are excited to be part of a project very near and dear to the people of Norway. Interactive learning and studying is of the highest importance these days where everyone is used to a high level of multimedia entertainment. The effective way in which Bright has deployed our Wings Engine Raw servers ensures a future-proof solution for future generations to enjoy on each and every visit!”
The creative team at Centre Screen included:
• Paul Kucharski, Creative Director
• Hayley Walsh, Executive Producer
• Daniel Lusby, Senior Motion Designer
• Fiona Williams, Audio-visual Producer
• Daniele Baron, Multimedia Producer

See a video clip of the Olympic Museum in Lillehammer: