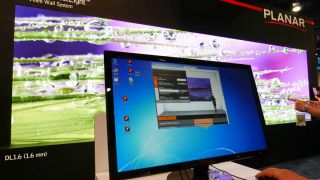 1.2mm pixel pitch high res LED at the Leyard booth at the NAB show in Las Vegas, in April 2015.If you’ve walked the major trade show floors this year, you’ve seen a lot of new direct view LED products. While LED walls have been around for a while, the evolution was strong but not dramatic. Lots of low-resolution LED for outdoor use. Think big football stadiums, then go down from there. High res LED bumped along for years, but high res meant anything below 5 or 6mm pixel pitch. Just two years ago, 3mm pixel pitch was revolutionary, when we first saw it from only a few manufacturers. But it was rare and expensive and did not really present a mass market alternative to LCD panels for indoor use—because LCD panels were going through their own revolution and kept coming down in price and adding great new feature sets most importantly ultra thin bezels that resulted in essentially a bigger, seamless canvas.

But this year is different. At the CES show in January, the Digital Signage Expo in March, NAB, and then the InfoComm show in June—we all saw an explosion of high res direct view LED. Samsung showed its 1.1mm LED at first DSE then InfoComm. Silicon Core has 1.9mm. Planar’s 1.6mm is very impressive, and AOTOs 1.2mm technology is out there.

But what caught my eye, back in March at the NAB show in Las Vegas, was the stunning display of 1.2mm pixel pitch high res LED at the Leyard booth. While we’ve all seen a variety of Chinese LED manufacturers at trade shows over the past 3-4 years, this company seemed different. And further investigation confirms that Leyard is different. They have more than 250 patents in China. And they sell about 70% of their product in China. And indeed they have a high profile in that market, and have had since the opening ceremony of the 2008 Beijing Olympics in the “Bird’s Nest” stadium, including the Olympic Rings and the ground scroll display system, that featured Leyard LED.

Planar debuted its 1.6mm direct view LED at the Digital Signage Expo March 2015 in Las Vegas.
The acquisition got me wondering if the Planar 1.6mm LED at InfoComm was in fact a Leyard OEM product. But Planar told me last week that only some components of that product was from Leyard and in fact it was a Planar-engineered product.

The direct-view LED video market is rife with competition from low-cost companies mostly based in Shenzhen, China. As I wrote earlier this year after the news broke of Samsung acquiring Yesco, smaller local companies such as YESCO have been particularly hit by such competition, while premium brands such as Daktronics, Barco, and Mitsubishi have been able to maintain revenues due to their reputation in the market. Samsung provides YESCO and its customers the credibility of a global multinational brand, after that acquisition. And now Planar, a sophisticated engineering company with well above average 4K LCD flat panels and other digital signage offerings, should do well with the deeper pockets and R&D of a larger company like Leyard– and the “synergies” we hear about in every acquisition press release are real here, and should make for intriguing developments from this new pacific rim entity.

Here is the full press release from Leyard and Planar:

BEAVERTON, Ore. & BEIJING–(BUSINESS WIRE)–Aug. 12, 2015– Leyard Optoelectronic Co., Ltd., a leading worldwide provider of LED display products and ancillary systems, and Planar Systems, Inc. (Nasdaq: PLNR), a global leader in display and digital signage technology, announced today that they have entered into a definitive merger agreement, pursuant to which a U.S. affiliate of Leyard will acquire all of the common stock of Planar for a purchase price of $6.58 per share. The merger values Planar’s equity at approximately $156.8 million on a fully diluted basis. The transaction is subject to specified closing conditions, including approval by the shareholders of both Planar and Leyard, and antitrust and other government clearance.

The pending acquisition augments Leyard’s existing range of LED display products and enables Leyard to expand its position outside the Chinese market.

Planar’s board of directors has unanimously approved the merger agreement and recommends that its shareholders vote to approve the merger agreement. Planar expects to hold a special meeting of its shareholders to consider and act upon the proposed merger as promptly as practicable. Details regarding the record date for, and the date, time and place of, the special meeting will be announced when finalized.

Victor Li, Chairman of Leyard, said, “We believe that Planar and Leyard complement each other and that this acquisition will create significant synergies. We intend to strongly support the continued growth of the Planar business, with standalone management, under the broader Leyard umbrella. This acquisition demonstrates Leyard’s ongoing commitment to expanding its global presence. The combination of Planar's strong customer relationships, respected product offerings, and history of innovation across the organization, together with Leyard's market leading position in emerging video wall technologies create inspiring solutions for customers.”
Gerry Perkel, Planar’s President and Chief Executive Officer, said, “I believe this transaction represents an outstanding opportunity for our shareholders, employees and customers. The acquisition by Leyard will provide our investors with a 42% premium to market based on our latest closing price and a 51% premium based on a seven day volume-weighted average price of Planar common stock of $4.35, and will position the Planar business for continued growth and innovation.”

Closing of the acquisition, which is subject to specified conditions, is expected to occur in the fourth calendar quarter of 2015.

Planar, Inc. (Nasdaq: PLNR) is a global leader in display and digital signage technology, providing premier solutions for the world’s most demanding environments. Retailers, educational institutions, government agencies, businesses, utilities and energy firms, and home theater enthusiasts all depend on Planar to provide superior performance when image experience is of the highest importance. Planar video walls, large format LCD displays, interactive touch screen monitors and many other solutions are used by the world’s leading organizations in applications ranging from digital signage to simulation and from interactive kiosks to large-scale data visualization. Founded in 1983, Planar is headquartered in Oregon, USA, with offices, manufacturing partners and customers worldwide.

Leyard Optoelectronic Co., Ltd. designs, produces, and distributes a range of LED display products and its ancillary systems worldwide. Leyard offers indoor, outdoor, fixed and creative LED displays that are used in various applications, such as sports, advertisement, concerts, shopping malls, stadiums, exhibitions and other indoor and outdoor events. It also rents LED displays. Leyard was founded in 1995 and is headquartered in Beijing, China.

Additional Information and Where to Find It

Investors will be able to obtain a free copy of documents filed with the SEC at the SEC’s website at http://www.sec.gov. In addition, investors may obtain a free copy of the Company’s filings with theSEC from the Company’s website at http://investor.planar.com or by directing a request to: Planar Systems, Inc., 1195 NW Compton Drive, Beaverton, Oregon 97006, Attn: Investor Relations, 503-748-8911, invest@planar.com.

Participants in the Solicitation

The directors, executive officers and certain other members of management and employees of the Company may be deemed “participants” in the solicitation of proxies from shareholders of the Company in favor of the proposed merger. Information regarding the persons who may, under the rules of the SEC, be considered participants in the solicitation of the shareholders of the Company in connection with the proposed merger will be set forth in the proxy statement and the other relevant documents to be filed with the SEC. You can find information about the Company’s executive officers and directors in its Annual Report on Form 10-K for the fiscal year ended September 26, 2014 and in its definitive proxy statement filed with the SEC on Schedule 14A on January 9, 2015.