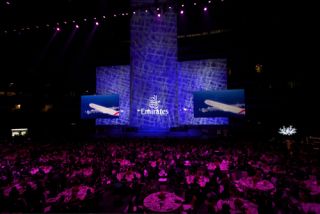 Goldman deployed 24 GDS LiteWare Satellite up-lighters to illuminate the stadium’s exterior arched entry and positioned additional fixtures along the red carpet, which led guests to the VIP lounge for cocktails. Bright Star Productions of Houston implemented all the entryway designs.

GDS’s LiteWare range of RGB LED solutions for lighting include the new Satellite, which offers a fully-adjustable head with 360º pan and 180º tilt for easy focusing. The up-lighters provide an ideal solution for demanding events. With no cabling required for power or control, the fixtures are deployed in the desired locations by simply switching them on.

“A.C.T Lighting’s Ben Saltzman showed me the fixtures about a year ago, and I saw them again at PLASA,” Goldman explains. “They work great. You just set them and forget them. They’re bright, require no cabling and have handy wireless DMX. They’re perfect for quick one-of installations like the Emirates gala.”

After cocktails in the Legends Club, Emirates guests were led to stadium seating for the first presentation. The venue’s 70x160-foot LED screen (currently the world’s fourth largest) was lowered to 40’ feet above the 50 yard line on the field and curtained off with black velour traveler track. Ward & Ames asked Goldman to create a simulated landing strip runway which he did by lining it with 130 feet of Color Kinetics ColorBlaze lighting and High End Dataflash strobes, using vertical trusses as searchlight towers. When the traveler opened it revealed an elegant dinner setting and a 120-foot wide stage on the opposite side of the field.

Goldman controlled several hundred lights with a grandMA console; a second desk was on hand for backup. “When it’s my choice, I only specify grandMA,” he declares. “Paul Sonnleitner did some fast and beautiful programming on it.”

In addition to the runway lighting, the grandMA controlled cyc lighting with 75 fixtures working together to produce more than 25 different looks for the set. The stage boasted a 115-foot high center cyc flanked by 68-foot high cycs.

The console also controlled stage lighting, dance floor lighting and back lighting. Goldman turned to the grandMA for control of audience lighting, too, which featured 60 fixtures.