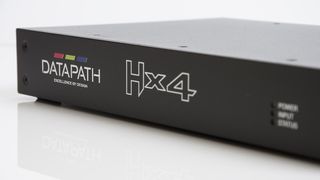 The What: Datapath has added to its display controller range with the introduction of the standalone Hx4.

The What Else: Joining the Datapath controller portfolio alongside its Fx4, the Hx4 features a single HDMI1.4 input and four HDMI1.3 outputs, allowing a wide range of creative possibilities and the ability to rotate, crop, upscale, and mirror content. Each output monitor can take its input from any region of the output image as all of the cropping, scaling, rotation, and frame-rate conversion is handled by the Hx4 hardware. With the ability to splice and overlap these regions, this allows any mix of monitor orientations, giving users the freedom to create an unlimited multi-monitor display canvas.

“With its power and versatility, we expect the Hx4 to be a popular choice for advertising boards, corporate signage, and live events,” said Mark Rogers, product manager, Datapath. “Our engineers have developed a product that ticks all the boxes for today’s AV integrators with simple setup and renowned Datapath reliability. We showed it as ISE and initial response has been really encouraging.”

When used with Datapath’s powerful Wall Designer applications software, the Hx4 can represent nearly any arrangement or configuration of the source image. “Our hugely popular multi-screen design tool has been updated to work seamlessly with Hx4,” Rogers said. “Wall Designer allows users to add displays from the ever-expanding database of monitors, visualize their content by adding inputs and adjusting display regions, and then instantly program their Hx4s either via USB or the network ports.”

Datapath’s Hx4 has a single Ethernet connection, which can be used for status monitoring and complete control of the hardware. A flexible REST application program interface is also supported to allow third-party software integration.

The Bottom Line: Capable of running a single 4K HDMI source across four HD outputs in ultra-high definition, the Hx4 is now shipping, delivering power and creativity for nearly any digital display configuration.