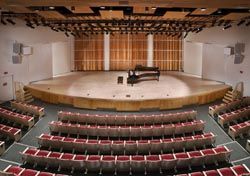 Located on Manhattan's upper east side, the Kaufman Center is a multi-art organization comprising the renowned Merkin Concert Hall, the Lucy Moses communication arts school, and P.S 859, a NYC public school for musically gifted children.
"JaffeHolden's almost exclusive use of SymNet products came down to two things," said Bausher. "First, we like SymNet's variety of DSP blocks and are especially partial to SymNet's all-important automixing and loudspeaker processing algorithms. The units are easy to program and deliver stellar audio quality.

"The second deciding factor is SymNet's line of ARC controllers," he continued. "That's where all the DSP companies are really differentiated. We find that the flexible architecture of the ARC controllers makes programming complicated functionality in a comprehensible way straightforward. Importantly, each controller is relatively inexpensive, so it's no big deal to combine a lot of them."

Bausher implemented the Merkin Concert Hall's nine ARC controllers in a non-standard way, using custom-engraved faceplates to depict the specific functions of each controller. Three ARC-SW4s each provide four push-button momentary switches; two ARC-SWKs each combine four similar switches with a rotary knob; two ARC-MICs each combine four similar switches with a built-in condenser microphone for ease of paging; one ARC-EX4 expands the push-button capabilities of the ARC-SW4s; and one ARC-EXK expands the bank's functionality with a rotary switch.