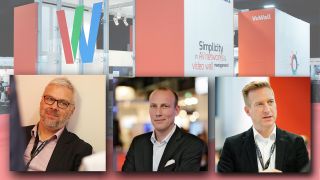 VuWall, provider of video wall control and AV network management, has consolidated VuWall Canada and VuWall Germany under a single umbrella as VuWall Group. Merging the two companies will unify VuWall's efforts, broadening the hours of operation by its global sales and support infrastructure and offering faster delivery.

"Our mantra in everything we do is to simplify, whether it's the user interface of our product or our internal operations," said Paul Vander Plaetse, CEO. "By unifying our two divisions, we can now leverage the best talent, operate more efficiently and effectively as we continue to experience dramatic growth worldwide, and provide superior product, service, and customer support. Together, we are stronger."

Software development and R&D will continue to operate entirely out of Montreal, while manufacturing and production will be consolidated exclusively with VuWall's German division. Marketing, operations, sales, and support teams will now have resources on both sides of the Atlantic, extending the company's hours of operation and overcoming the challenges of time zones and language. In addition, the VuWall reseller certification program will be offered to integrators in both Europe and Canada, expanding VuWall partnerships to every country on the planet.

"The original mandate of VuWall Germany was sales and support for the European and Middle East markets,” said Eric Hénique, VuWall's chief sales officer. “However, due to our recent growth in almost every continent and with many of our partners and customers having global operations, it no longer made sense to operate independently.”

In preparation for this transition, VuWall started implementing its "one company" mission in Q2 of 2019, which already has proved to be more efficient for VuWall's customers and partners as well as its employees. VuWall recently celebrated its 10-year anniversary, and in anticipation of its continued international leadership of video wall control and AV distribution solutions, this restructuring will also strengthen the company for the next decade of growth.

"We want to deliver the best experience to our customers, both in terms of the products and the support we offer," said Mark Schmidt, VuWall chief technology officer. "This consolidation aligns with those efforts. Now customers can expect a faster response from a solid, more accessible technical support team no matter where they are located. This will also enable us to more easily service our growing market in Asia."