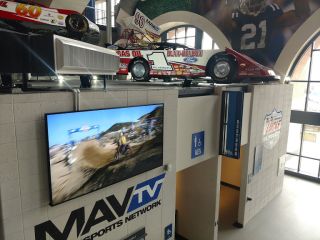 Lucas Oil Stadium in Indianapolis, IN, is a state-of-the-art multi-purpose facility seating over 67,000 fans with a retractable roof. Originally opened in 2008 as the new home of the NFL’s Indianapolis Colts, its flexible design can also accommodate NCAA basketball, corporate events, concerts, and more.

In operation for 10 years, the original AV system was archaic and dated. The operation was manual and decentralized, using a rack-mounted touch panel to power systems on and off, switch video sources, and manage other control elements. Users had to walk to DVD players and certain displays to turn them on. A cluster of noisy, power-hungry, and heat-producing 4RU servers that fed digital content increasingly began to fail.

The 4x4 video wall was also problematic. As years progressed, displays began to fail, and it became increasingly more difficult to source identical replacements. The original 52-inch displays had a ¾-inch bezels, which equated to a 1-1/2-inch gap between displays. Increasingly, the wall resembled a checkerboard. As display technology has matured, bezels have grown much less noticeable, drawing negative attention to the existing wall.

With centralized control, system reliability, and the fan experience all lacking, the executive team decided to substantially update the Lucas Oil Stadium network in two phases. First, there would be a comprehensive new digital signage network deployment. Second, an engaging video wall would breathe new life into overall AV operation. In both cases, the new network would be more automated, visible, energy-efficient, scalable, flexible, and pleasing to the eye.

The Solution: Migration to a Centralized Network

While the Lucas Oil Plaza signage network has had a broad footprint, the content has been fairly simple, with basic PowerPoint slides and content from DVD players and laptops fed to the various end points. The expense of maintaining the original system, coupled with its fading reliability, clearly pointed to a new strategy.

The Plaza’s existing wired infrastructure was repurposed and provided plenty of bandwidth to distribute and control content over IP. This steered the customer toward an AV over IP architecture to support this second-generation digital signage network, one that leveraged an Atlona platform for networked switching, distribution and control.

“As IT technicians, we were at home managing systems over IP networks,” said Cory Poore, IT and network technician, Lucas Oil Plaza. “They are far more dynamic and flexible than working with legacy circuit-based systems. Moving to IP made sense as a common infrastructure that could scale easily, and support new applications and technologies as our AV vision evolves.”

The migration to IP overcame potential signal and distance limitations inherent in legacy systems. As large as Lucas Oil Plaza is, they wanted a system that could achieve greater signal distribution distances, and easily add PoE network repeaters when and where necessary. The team selected Atlona’s OmniStream AV over IP platform as the ideal choice for switching and distribution over the network.

“There was an immediate benefit from the integration perspective,” said Poore. “OmniStream worked with our existing wired infrastructure since we had twisted pair wiring from our central rack to the various displays. Furthermore, OmniStream could operate with multicast transmission applied to each switch. This would avoid sending AV traffic to network devices that did not require it, saving bandwidth and eliminating device potential lockups due to related network traffic.”

In addition to the single displays, the OmniStream rack feeds the Plaza’s 4x4 video wall. The video wall’s location prevented any feasible option to install 16 separate twisted-pair runs to the decoders behind each display. Instead, they leveraged a single high-bandwidth infrastructure.

[The Integration Guide to Video Walls]

“We opted for a 10Gb copper CAT6a backbone from the core switch to all other switches, which further preserves network bandwidth,” said Poore. “Having a detailed static IP address allocation for all devices also proved essential to ensure system stability and reliability, avoiding any potential shifting IP addresses, or IP conflicts.”

Integration of the exhibit displays and video wall first required a significant teardown phase. Eight 16-foot sections of horizontal channel strut were added to attache the new display mounts. New CAT6A UTP cabling was also pulled to the video wall to provide plenty of bandwidth for multiple simultaneous video sources to be displayed.

Once the exhibits were prepared, the installation team began the process of installing the new screens. The new video wall is comprised of 16 LG 55VX1D landscape screens, with Chief ConnexSys mounts supporting the displays. These are precision mounts offering six points of adjustment across height, tilt, depth, and lateral movement, providing great flexibility according the event needs.

The digital signage displays are fashioned as creative kiosks, with positioning in key traffic areas. Seven additional displays, ranging in size from 86-inch LG landscape displays on down, were added to various locations throughout with messaging that included oil-related topics for continuity. Some of these are part of the Lucas Oil entertainment content in the plaza area.

The new OmniStream platform will support 4K content, an improvement from the analog-only video support of the previous architecture. Additionally, the platform can accommodate live feeds from various sources for the first time, and will upconvert the content where necessary.

The move to centralized control over the network has perhaps been the greatest operational efficiency boost, according to Poore.

“In addition to eliminating our manual and siloed approach to control on site, the Atlona Velocity has liberated the staff through its remote control operation,” he said. “We can remotely connect to control the system, troubleshoot issues, and update system configuration. We can control the system from smartphones and tablets, and we find the UI intuitive and easy to use.”

Poore says the remote management features of the new system deliver the greatest operational value. And while there are no immediate plans to further expand the system, he emphasizes that Lucas Oil Plaza now has the IT network and AV system infrastructure well-prepared to accommodate future changes.