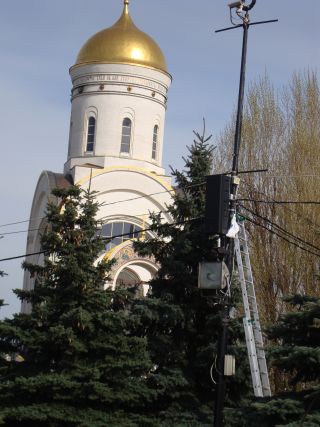 With the 65th Anniversary of Russia’s victory with the Allied Forces in World War II fast approaching, Poklonnaya Gora’s curators began looking into upgrading their current system in time for the anniversary celebration. After enduring their original system for years, they realized a system upgrade was desperately needed before the special anniversary celebration began this year. Avallon Ltd. of Moscow was contracted for a new sound system installation.

The memorial, a brainchild of Moscow’s Mayor Yury Luzhkov, includes the museum and a mile-long walkway that includes rides, colored fountains, restaurants and cafes. The memorial playground also includes a military theme park where children can explore World War II tanks and other equipment, giving them a better understanding of the period. A particularly stirring structure on the grounds includes a 465-foot obelisk representing the 1,420 days of the war, topped with two bronze cherubs and a 3-ton statue of Nike, the Goddess of Victory, sculpted by Moscow’s famed artist, Tsereteli.

Moscow’s weather has frequent thunderstorms in the summer and heavy snow in the winter. Avallon Ltd. knew that weatherproofing was a top priority for this installation, due to the year-round exposure the speakers would endure. “Our goal was to provide enough power and output to cover the entire park, as well as to find a system that could withstand the elements day in and day out. We, along with the memorial’s curators are very pleased with the sound and the entire project,” says Sergey Vashchenko of Avallon Ltd.

The installation called for twenty One Systems 212IM-100 speakers with distances of about 164 – 263 feet between speakers. Vashchenko adds, “The speakers are mounted to existing poles throughout the complex, which was a challenge because the power amplifiers are located a good distance from each speaker. This limited us to wiring above ground to the poles, but the clarity, projection and vocal intelligibility of the One Systems speakers is incredible and our client couldn’t be happier.”