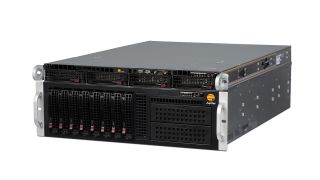 The What Else: The processor can power up to 48 displays and a maximum of 156 4K IP and direct inputs, with a density of processing power that allows for fewer input/output boards to reduce an installation’s hardware footprint. Catalyst XL is available with a four-channel HDMI input board capable of ingesting resolutions up to 4K per input, and which can be synchronized for 8K capture.

Using point-to-point technology, Catalyst XL offers bandwidth at bidirectional speeds of 15.8GB/s PCIe Gen 3 x 16 that enables direct data sending without needing to go through system memory. Next-generation DirectGMA technology enables the processor to maintain frame synchronization while handling high-speed data transfer from the capture board to one or more GPU boards, and it can support full-duplex communication between any board for full-frame rate transmission from the source to display through the PCIe bus. For easy deployment, Catalyst XL includes a new graphics driver, support for multiple languages, and backwards compatibility with the Jupiter by InFocus’s ControlPoint software.

Catalyst XL offers users security and ease of use with a specialized version of Windows 10 LTSB and Jupiter by InFocus’s collaborative visualization software, Canvas, in its newest 5.6 version. With Canvas, users on a mobile device or conference room display can view video, data, and applications from a control room, as well as annotate directly on live video streams, chat by text or voice, and collaborate on documents in real time. Catalyst XL can be used for a single video wall using Canvas or it can be connected to a Canvas Enterprise ecosystem, where multiple video walls are managed by one or more Canvas servers.

“Equipping Catalyst XL with the fastest bandwidth available, along with more 4K direct inputs and streaming sources, was critical in debuting our newest flagship display wall processor,” said Devon Wright, Jupiter by InFocus product manager. “We’ve tapped into processing, memory, and resolution advancements to give users a highly capable solution designed for the enterprise and mission-critical applications the Jupiter brand is known for.”

The Bottom Line: Catalyst XL is designed to support enterprise as well as mission-critical, 24/7 operations that require video quality and uptime, both for single video wall installations and those on a corporate network with multiple connected video walls.