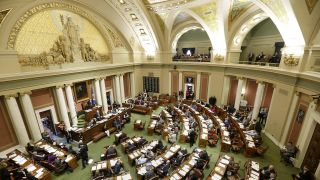 With millions of daily visitors, YouTube has become an ideal platform for government agencies to keep the public apprised of breaking legislative developments. Content traditionally reserved for public TV or meeting rooms is now increasingly being live streamed, as the Minnesota House of Representatives is showing. House Public Information Services, a non-partisan office of the Minnesota House of Representatives, broadcasts select meetings live on PBS and cable when the House is in session, but also delivers a live stream of every meeting room to YouTube, relying on AJA’s HELO to stream meeting content to potential viewers 24/7.

Looking to enhance the accessibility and quality of each stream, House Public Information Services engineering director Michael Simonds recently modernized the agency’s workflow, bringing streaming in house and upgrading image quality from SD to HD. “HD is everywhere now, and before using HELO, our feeds were down-converted from 1080i and streamed in SD to our website using a third-party service,” he said. “That level of quality just wasn’t cutting it anymore, especially for the cost, but fortunately technology like HELO has made it easy and affordable to stream HD content to better cater to audience viewing habits.

"With HELO, we can live stream high-quality content straight to YouTube, so anyone who is interested in meetings or debates on important issues can open up the YouTube app, find the stream they want to view, and tune in directly from their computers, phones, or other portable devices; it’s improved the viewer experience and saved us a ton on streaming costs.”

HELO’s support for closed captioning was another key consideration in the workflow overhaul, as the office strives to be ADA compliant for the public. Latency also played a large factor in the decision. “HELO’s closed captioning support is huge and a major reason we decided to go with it,” Simonds said. “The devices have also helped us reduce latency by nearly 90 percent, going from one minute to five seconds; that’s a noticeable improvement and perfect for the kind of talking-heads content we’re covering.”

The Minnesota House of Representatives campus spans multiple committee rooms with production equipment spread throughout the House Chamber and surrounding buildings. The main production facility is based in the state office building across the street from the House Chamber and features two production control rooms. Since all meetings are considered public, 13 HELOs located in a media hub in the basement of the Minnesota State Capitol, where content is distributed, stream committee room footage 24/7 to allow access to meetings that may not get television coverage. All video typically runs through the media hub and is converted from SDI to fiber for long distance runs, and back to SDI in the main control room. There, it is run through a switcher and graphics system. Audio is distributed back at the House Chamber and submixed down to Simonds’ department. Graphics are then added into the feeds, which are converted back to fiber and transmitted across the street to the Capitol building and back into the media hub. The feeds are then sent across a VLAN to the House IT network, where its internet connection is used to send the feeds to YouTube.

“The HELOs pack a lot of punch for such little devices,” Simonds said. “Lined up vertically in a rack, their power is impressive, especially given the massive workstations traditionally used to achieve the same end result. They’re also super easy to use: plug them in, turn them on, and they do exactly what you want. They just keep working, even when running 24/7—true workhorses.”

In addition to using HELOs for live streaming to YouTube, Simonds’ team uses a host of other AJA gear for delivering content to broadcast to public TV stations. These solutions include FS2s for frame synchronization, and Hi5 Mini-Converters for converting SDI to HDMI for large HDMI monitor walls.