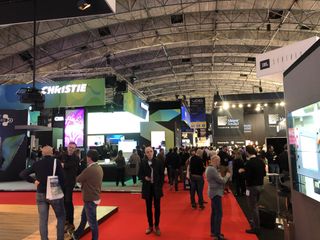 Bleary-eyed but with the future looking bright, I’m fresh off the plane from Amsterdam and ISE 2020. This year’s show was a whirlwind, filled with fist-bumps (no hugs thanks to coronavirus worries), an interesting show floor (more on that later), and late nights (thanks, jet lag!).

Heading into ISE, there was a bit of uncertainty in the air. Between the coronavirus outbreak, Storm Ciara (a powerful and long-lived extratropical cyclone that hit the UK in the days leading up to ISE), and this being the show’s last year in Amsterdam, I wasn’t quite sure what to expect on site.

Would people show up? (Yes.)

Would there be noticeable holes on the exhibit floor? (Kinda.)

Would attendees still be enthusiastic about the show? (Heck yes.)

[My First and Last ISE in Amsterdam]

As I hit the floor on Tuesday, I was a bit surprised at how easily I was able to navigate the building—nobody was running into me and we weren’t packed shoulder-to-shoulder as in past years. But the vibe changed significantly on Wednesday when everyone delayed by Ciara finally made it into town. It wasn’t just my intuition telling me that—according to show management, there were 6,412 more people at the show on Wednesday than there were on Tuesday.

As for innovations, there weren’t many groundbreaking product launches. Most were moderate upgrades to make the lives of integrators and end users easier. But I did manage to see some cool products and experiences. Shure launched IntelliMix Room, a software-based audio processing system for AV conferencing with no DSP hardware required; Williams AV showcased Convey, a real-time translation instrument with audio archiving; and AVI-SPL partnered with Igloo to create an immersive workspace solution using 360-degree video.

The big value for me at this show (and, honestly, at most shows) was the networking opportunities. There was the AVTweetup, where I was able to meet social media influencers IRL (in real life), an AVJam recording at a local pub, and recording an episode of AVWeek with AVNation.

The show ended for me, and for many others, with the ¡Hola Barcelona! event, where attendees had a chance to reflect on their years spent at the Amsterdam RAI and to look ahead to the show’s new home in Barcelona. Memories of a city that is near and dear to #AVTweeps’ hearts were shared—the stroopwafels, the favorite dinner spots, the this-close-to-being-hit-by-a-bike stories, and the fun times. Farewell, Amsterdam—you were a great host. It’s hard to say goodbye, but we’re looking forward to new adventures. See  you next year in Barcelona!