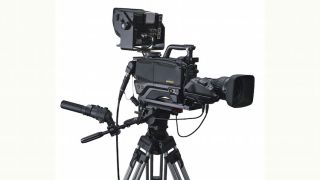 The Z-HD5000 broadcast camera from Hitachi Hitachi Kokusai Electric America, (Hitachi Kokusai) has added High Dynamic Range (HDR) imaging capabilities to its UHD, 4K, and HDTV broadcast cameras. As part of a limited-time promotion, any new Hitachi camera purchase made before September 30, 2016 will include the HDR feature at no additional charge.

“With the way we’ve designed and implemented HDR in our cameras, broadcasters and other video professionals will be able to produce significantly superior HDR imagery without having to upgrade their existing infrastructure or transmission systems,” Moran added. “HDR, which will be part of the emerging ATSC 3.0 standard, produces brighter, crisper, more luminous imagery, including UHD 4K video, resulting in a more immersive and engaging viewer experience.”

At the high end of the product line, HDR has been added to the Hitachi Kokusai’s SK-UHD4000 UHD studio/field camera. With its industry standard B4 2/3-inch bayonet mount and 2/3-inch sensors, operators can still make use of their existing HDTV lenses. The camera delivers the depth of field and high sensitivity needed for traditional TV studio and sports production with UHD quality.

At the Telemundo Cine Video Television Expo, Escape Audio Video will be show several Hitachi Kokusai cameras at Booth C-6, upgraded with the HDR feature, including the Z-HD5000 and SK-HD1000, as part of its product demos.

“With its support for HDR, Hitachi Kokusai has once again solidified its position at the vanguard of broadcast camera technology,” said Fernando Riestra, marketing director for Escape Audio Video.

Escape Audio Video and Comtelsat will use these Hitachi Kokusai cameras as acquisition systems as part of a bigger video/IT workflow demonstration that encompasses third-party products by such top video vendors as: Avid, SAM (Snell Advanced Media), Riedel Communications, PrimeStream, and Editshare. During the four-day expo, Hitachi Kokusai’s sales manager for Latin America, Tyke Manalang, will be on hand to meet with customers and support the partners’ Hitachi HDR/camera demos.

According to Israel Gomez, Comtelsat general manager, “The Mexican broadcast market is one that demands uncompromized quality at affordable prices. With its current HDR promotion, Hitachi cameras will be especially hard to beat.”