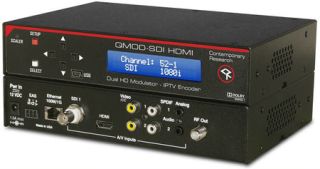 Contemporary Research's QMOD-SDI HDMI
The QMOD-SDI HDMI has dual encoders to process two MPEG video streams, each supported by a hardware scaler that can accept and format virtually all video between 1080p and 480i in NTSC, VGA and PAL standards. Audio can be embedded or fed separately to digital SPIDF or analog stereo inputs. Two NTSC inputs support composite video or video with closed captioning data.

The new QMODs are fully convergent, able to output the video streams as a dual program digital RF channel or as an IPTV stream. An upcoming firmware update will support a variety of configurations for MPEG2 and MPEG4 streaming and can output two independent single-program IPTV streams.

"We have had many requests from houses of worship for an encoder modulator that could handle their primary media needs in one unit,” says Doug Engstorm, VP of technical services. “We listened and created the QMOD-SDI HDMI Modulator-IPTV Encoder.”