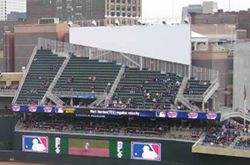 This spring, the Twin Cities of Minneapolis and St. Paul, MN celebrated the opening of Target Field, home of MLB’s Minnesota Twins. Featuring a modern facade of glass and native Minnesotan limestone, stunning views of the Minneapolis skyline, and fantastic sight lines, Target Field holds approximately 39,500 spectators, with nearly half of those seats in the lower bowl.

In the right outfield, the upper deck and lower deck are covered with the scoreboard-topping JBL speakers and more under-deck units to cover the lower seating.

The intimate-feeling bowl and 360-degree open concourses bring an old-fashioned ballpark feel to a chic new facility. But in terms of audiovisual infrastructure, the facility is entirely modern. Advanced AV distribution runs over ethernet and a fiber backbone, providing IPTV content on 400 interior and 200 exterior Insignia LCD displays and SunBrite outdoor LCDs mounted with Chief Manufacturing products. Adjacent audio and video control rooms are the heart of a truly wired stadium, where press rooms, luxury suites, and even elevator lobbies offer a high-tech feel melded with a sophisticated aesthetic. Throughout this networked stadium, audio and video can be accessed from multiple locations.

In terms of audio, the stadium is a CobraNet facility, with Harman Pro brands making up the bulk of the distributed audio schematic. Wrightson, Johnson, Haddon, and Williams (WJHW) designed the system, and TSI Engineered Systems of St. Charles, MO performed the installation as a subcontractor for Parsons Electric.

In the bowl, weatherized JBL AE Series loudspeakers installed in the uppermost reaches of the stadium canopy have the longest throw to the box seats below. “The way they were able to connect and suspend those speakers was a feat on its own,” said Paul Murdick, VP audio visual for TSI.

Furthermore, “the bottom of the canopy was enclosed, so we had to work with the architect to create openings to shoot sound down through,” recalled WJHW principal Jack McCallum. For the areas under the club level, JBL created custom down- and rear-firing cabinets to augment forward-firing speakers.

Speaker placement required creative design in other areas of the extremely sleek stadium, as there was no canopy to work with in the outfield. In a first for WJHW, no speaker poles were installed. Instead, speakers were mounted along the top of the scoreboard in left and centerfield to cover the lower seating areas, while additional boxes were placed below the scoreboard to cover areas immediately below and slightly in front of the structure.

In the right outfield, the upper deck and lower deck are covered with the scoreboard-topping speakers and more under-deck units to cover the lower seating.

Twins history is woven throughout the facility in a manner reflecting a museum as much as a ballpark. The Club Level includes Kirby Puckett and Rod Carew venues, where gigantic atrium spaces are covered by JBL Control 300 ceiling speakers and concourses are zoned with JBL 226CTs. Suites are outfitted with JBL ceiling speakers and JBL Control 29AV speakers in the outdoor seating areas.

The Champions Club is a multimedia extravaganza, with two Crestron TPS 4000 touch panel control points, drop-down Da-Lite tab-tensioned screen, LCDs, and of course audio distribution. Here and throughout the facility, TSI partnered with Cisco to provide IPTV access at any audio point, and any control panel in the facility, according to WJHW’s design.

Three amp rooms filled with Middle Atlantic racks and additional local rack facilities contain the BSS London BLU series DSP, dbx processing, and Crown CTs series amplifiers that make up the audio system. Club level venues offer Listen Technologies assistive listening, and these and various other spaces are outfitted with presentation mic and laptop input panels. In the sound control room, a Yamaha M7CL console runs the show, and audio racks of gear allow the engineers to patch in and out of anywhere in the facility with full control via Harman Pro HiQnet System Architect software.

Similarly configured AV systems were also installed in the Owners Ballroom, Tour Theater, Legends Club, 573 Club, the Town Ball Tavern, and the high-end Metropolitan Club. Already in its first season as a venue, Twins fans are finding that from the entrance plaza, through the gates, along the concourses, in the various entertainment and dining venues, and most importantly in their seats, they have the best possible sound and video coverage. That certainly makes it easy for them to root for the home team.