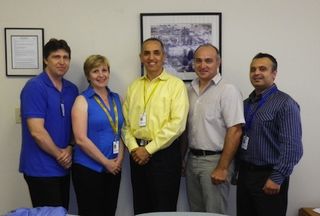 Sometimes, when you actually introduce a product that is “an industry first,” you figure out quickly why that was the case.

“We definitely learned why no one else has it—because it’s very difficult to make,” laughed Altinex founder, president, and CEO Jack Gershfeld. “There were a lot of things that we didn't anticipate when we started working on it 14 months ago.”

But after a stroke of true inspiration, the roadblocks were cleared and Altinex found its Muse.

At the outset, Altinex was hoping to go one step further with its HDMI and IR distribution system and create something more than a “me too” HDMI over Cat-6 product. As the engineers pondered what to add to their special blend on this offering, the fates intervened and the decision was made to enter uncharted territory and add power. Yes, power, as in enough current to power a video monitor over a single Cat-6 cable.

“The answer became obvious when we set up a mock-up in our engineering department,” Gershfeld said. “We were standing there, connected to Cat-6, and regular HDMI, and one of the engineers said we don't have power because the nearest power outlet was about 20 feet away.”

Somewhat of a comical scene ensued, Gershfeld recalled, laughing. Apparently there existed in Altinex’s in-house supply offerings no extension cords longer than six feet in length. So they ended up stringing up a series of cords to power the mock-up. “Then we were looking at it, and we said, ‘The holy grail is the power outlet!’ It's not the video. In fact the video is almost the icing on the cake.”

“Instead of putting more pressure on engineering, we basically took it away, and said, ‘Guys, don't worry about it, do whatever you want. If we can't make it, that fine, we can't make it,’” Gershfeld recalled. “I think just taking that approach actually helped a lot to make the final product. Then when we were able to resolve the issues and get a prototype working, it was the result of inspiration from everybody involved. From engineers and from managers—because managers had to have faith that engineering could actually do this.” Gershfeld added that Grant Cossey, vice president of sales, was instrumental in providing product ideas.

The relaxation-induced Eureka moment made it possible for Muse to distribute power, HDMI, and IR control signals up to 300 feet over a single, low-voltage, shielded Cat-6 cable (find out more here).

Next came the fun part—Altinex demonstrated the product at InfoComm. Inspired by the introduction of Muse, customers were coming up with all kinds of new application ideas in healthcare, digital signage, and a slew of other areas. But consistently, amid the hub-bub at the Altinex booth, AV integrators and consultants were asking if they could plug and unplug the setup to see if power really was being transmitted over HDMI. Requests were so frequent that the decision was made to have some unplugging fun on the third day of the show.

“Most customers who were told to come back on Friday showed up, and we let them plug and unplug the system,” Gershfeld said. The first couple of times, nerves were on edge in the booth, “but after a few times we saw that nothing failed and everything works great.”

Aside from being one heck of a whizbang-cool innovation, Muse may likely change the way installs are done. Instead of wasting the first site visit merely marking electrical outlets locations for monitors, integrators can instantly set up a system using power over HDMI.

“You now have your own schedule,” Gershfeld said. “You can take your job, walk into the installation, finish it, and walk away.”

Some dealers have already said they’ll keep spare Muse systems in their trucks for those wonderful times when you arrive on site and outlets were not installed where previously designated. “Instead of driving back to the office and saying we'll try next time, dealers can install the system, get a change-order signed, go home with a complete order, and start billing.”

Even if it’s just a temporary solution until an outlet can be installed, at least a working system has been delivered. “This is exciting to us, because we know that a dealer’s schedule is so important,” Gershfeld noted. “We know what low margins they work on, and if they have to make an extra trip to the site, that's money wasted.”

Altinex is still working with UL to get Muse listed. The process has involved a lot of communication between the two entities as UL gets up to speed on an entirely new category.

With UL approval and some subsequent limitations on the size of the monitor that can be powered by a single Cat-6 cable (two cables can be used for larger displays), the product will be ready to ship early in 2013.