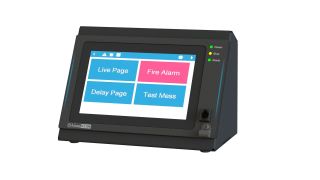 The What: At InfoComm 2019 in Booth 5653, AtlasIED will reveal its new IED570C-H touch screen mic station. The IED570 Digital Communication Station allows the global airport community to update their legacy button mic station to the newest, intuitive, high-definition touch screen.

The What Else: Fully programmable via the touch screen, the IED570 mic station eliminates the need for airline personnel to use physical buttons to unlock codes to start the boarding sequence. Each sequence can be pre-programmed to begin automatically, and gate personnel can see a preview of the boarding process on the screen.

The new IED570 mic station options include a desktop or flush-mount footprint, allowing immediate retrofitting of the existing IED528 series. Simply mount the IED570C-H directly to the 528 backbox. Along with the T112 Series, the new IED570 Digital Communication Station offers Power over Ethernet (PoE) functionality with redundant Ethernet ports. A network-based appliance, each IED570 station can obtain an IP address automatically or be assigned a unique IP address, simplifying installation and configuration.

The Bottom Line:  The IED570 gives gate agents control of the pre-programmed sequences at the touch of a finger, along with audio intelligibility for enhanced customer service at the gate. Designed to initiate announcements, messages, and pages with the Globalcom Series Announcement Control Systems, the IED570 also includes an auxiliary line-level audio input to connect to a background music source, as well as a line level audio output, which can be used as an additional audio zone.

InfoComm is giving our readers a free Exhibit Hall pass to the show! Use VIP Code "FUTURE"  to redeem your free pass. Click here to register.