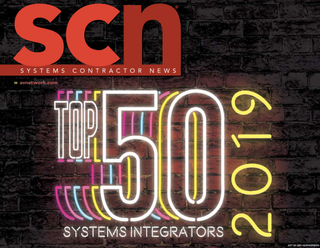 This year was not, unfortunately, the year an AV integration firm hit $1 billion—but we’re getting closer. AVI-SPL once again took the top spot on SCN’s annual Top 50 list. The firm has a projected revenue of $905 million from commercial AV systems installations this year—that’s $85 million more than its 2018 revenue.

The top four firms this year are the same as in the past several years: AVI-SPL holds the top spot, followed by Diversified and Whitlock, then AVI Systems. The number five spot in 2019 is occupied by Avidex, following the company’s launch of a new portfolio of managed services in January. Ford Audio-Video dropped out of the top five and is number seven on the list.

New to the Top 50 for 2019 is AVMI, which landed at number 11; earlier this year, it expanded its U.S. presence with a larger office in the Tribeca district of Manhattan and added Craig Bonner as its executive vice president in the United States. Key Code Media, also new to the list, took the number 20 spot.

Mergers and acquisitions have impacted the list, which seems to be the norm these days. Interestingly, Level 3 Audio Visual, which acquired Audio Visual Resources in March, actually dropped three places, from 34 to 37.

You’ll notice there are more than 50 companies on the list this year—55, to be exact. That’s because there were several ties: Solotech and Electrosonic at number nine; Carousel Industries and Washington Professional Systems at number 17; USIS AudioVisual Systems, Tierney Brothers, and Spectra Audiovisual Design at number 29; and TSI Global Companies and SVT at number 39.

It’s important to note that all of the SCN Top 50 submissions are voluntary. The information provided comes directly from the integration firms who are willing to publicly share their financials to allow our readers to get a better sense of the size of the industry.

Read more about the SCN Top 50: