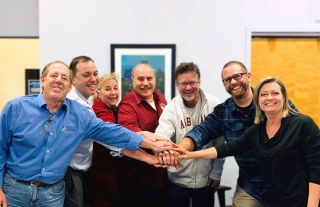 The blending of these two entities completes a story that began more than six years ago in December of 2012, as told by the companies. It was then that Jeremy Elsesser, president of Level 3 Audio Visual, took the sage advice of Elaine Manfredonia, a technology leader in the financial industry, and traveled from Phoenix, AZ to Long Island, NY for a three-day immersion into AV-9000, the quality management brainchild of Mario Maltese and a process further developed by his son Jim Maltese and Lorrie Morrow, partners at AVR.

For Elsesser, this moment marked the beginning of what would become a new understanding on enterprise-wide technology delivery, standardization, and process.  For Mario Maltese, it sparked the possibility that someone would take his theories, processes, and program and flesh them out into a large scale, working model.  Over the course of six years Elsesser introduced the AV-9000 Standard to Level 3 Audio Visual and did just that.  In 2017, Level 3 Audio Visual became the West Coast certification house for AQAV, the non-profit group designated for AV-9000 education and certification. This provided expanded access for other AV integrators, designers, and technology managers to certify their teams and to begin incorporating a quality management system into their technology deployment programs.

“It is an honor to be part of the Level 3 Audio Visual family. It’s as if our companies were cut from different ends of the same cloth. I’ve never seen two teams comes together so naturally, with tremendous respect for what each is bringing to the table,
James Maltese, president, AVR said. "Combining Level 3 Audio Visual’s client experience and integration prowess with AVR’s ability to complete projects with zero defects, we are going to redefine how AV systems are delivered.”

The companies say that "if you were to ask the teams at both companies, you would be told this is less of a corporate acquisition and more of a passing of the torch. Mario dedicated much of his life to the pursuit of technical knowledge where quality, integrity, honor, process, and proof are integrated into the standardization and delivery of AV systems. The fact that Mario is passing this knowledge and commitment onto his son Jim and his 'adopted' son Jeremy marks yet another tremendous success milestone in the life and career of Mario Maltese."

“I am amazed by the synergy our two companies have created and feel humbled and honored to enter the New York market on such solid ground with such an amazing team," added Brad Peterson, CEO, Level 3 Audio Visual.