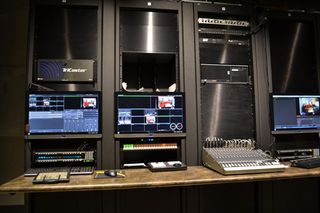 View of TriCaster program switcher with Utah Scientific control panel for sub-switching of sources."The system includes two separate production switchers for simultaneous productions within the arena," said James Graham, senior broadcast engineer at Wright State. "We needed a router in order to achieve the necessary level of flexibility, and Utah Scientific had the right mix of features and performance for our project."

The university's Video Technology Services unit installed a UTAH-400/144 routing switcher to bridge all of the production system components. The UTAH-400 dynamically allocates sources to switchers, monitors, and replay systems, and outputs signals to recordings, air feeds, encoders, and arena signage and displays.

The university also installed an SC-4 system controller, a UCP-SX full matrix control panel, four UCP-36 single bus control panels, and a SoftPanel-2 GUI control panel system. The full matrix panel is used to configure the system before each production, while the others change content during events.

"The UTAH-400 has dramatically reduced the amount of patching required, which reduces the amount of labor, equipment, and configuration time needed for each event," Graham said. "Not only does that allow us to be more dynamic in our response to athletic department requests, it also translates to savings we are able to pass on to our clients."

View of a Utah Scientific routing switcher, full matrix control panel, and SC-4 controller installed at Wright State University.This is the second Utah Scientific UTAH-400 routing system on the Wright State campus. Though the reliability of the equipment and customer support were cited as factors in the purchasing decision, having a second unit on campus allows the university to economize on its spare part inventory, and to take advantage of its experience base for programming and maintenance. Other benefits reported by Wright State include the modularity and availability of numerous control options, as well as the ability to support 3 GHz and fiber.

"Before purchasing each of our UTAH-400 systems, we did extensive research to investigate all available alternatives," Graham said. "Utah Scientific was clearly superior when we considered all of our key criteria. Utah Scientific has what is possibly the best warranty program in the industry, and in the rare event that you need to contact support, an actual person will be available to help you work through the problem — not because the unit is under warranty, but because it says Utah Scientific on the box."

"The award-winning Nutter Center is a first-class entertainment and sports facility," said Tom Harmon, president and CEO of Utah Scientific. "To maintain the Center's stellar reputation, it's critical that the video production system is the top of the line. Our routing and control systems were designed for just this type of challenge and we are confident that these systems will serve Wright State for many years to come."