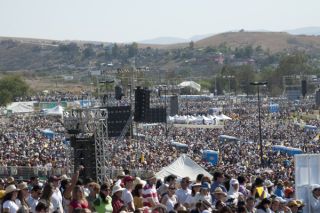 The daunting challenge of audio system design was shouldered by Rodrigo López of Mexico City-based consulting firm Zero Phase. His assignment was to provide uniform coverage across a vast, irregularly-shaped area—over a kilometer wide and a half kilometer deep—comprising uneven hillsides, sloped parking lots and open fields. To augment the main stage MILO arrays, López plotted a system of 40 delay towers laid out along 12 delay lines. Arrays on most towers were configured with five to eight MILO loudspeakers, with some delay lines deploying contingents of 30 M3D and 32 MICA® line array loudspeakers.

Pressure was high at an event of this scale. “I had some worries about getting clean, isolated signals out to all the towers,” he admits, “but from that point, I was confident the Meyer Sound systems would perform flawlessly. And even with very high afternoon temperatures, there were zero problems.”

“Meyer was one of only two makers with enough suitable loudspeakers available in Mexico, and I did not want to mix manufacturers. And only Meyer could also supply the very highest level of performance and technical support. So it was not hard to make that call.”

The audio throughout the event was noted and appreciated by dignitaries in the front VIP section. “Apparently they’d had problems with sound the day before with another system,” says López, “but when they first heard the pope speak, they turned around and gave us big smiles.”

In addition to the papal homily, the day’s program included music from a 70-piece orchestra and a 40-voice youth choir.