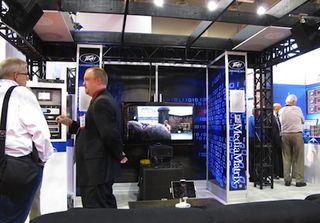 It used to be that you'd want to sell lots of hardware to make big margins. But with margins shrinking faster than a wool sock in the dryer, now you want less gear to handle more functions, so you can get out of there with a paycheck.

At least that's the way it looks in mid-market applications, where every extra cost eats in to whatever fraction of the budget is leftover once the millwork is paid for and the custom boardroom table arrives.

This was the thinking at Peavey Commercial Audio when it set out to not only shock the masses by adding video to its famed audio distribution technology, MediaMatrix, but also offer the capability to control AV systems via NWare software.

"We've had the AV integrators in mind, and wanted to help them keep more of the revenue earned on installations," noted Kevin Ivey, general manager of Peavey Commercial Audio. "If they're not paying third-party licenses or royalties for control software, and they're not having to pay another company to program the control system, that's a tremendous value proposition at a time when the market is making it more and more difficult to hold on to your profits."

As such, the new MediaMatrix VSC Series was designed to be the proverbial Swiss Army knife for conference rooms, boardrooms, classrooms, courtrooms, houses of worship, and mid-level entertainment venues. With that target in mind, the product development process revealed itself fairly simply, especially since the name "MediaMatrix" was chosen way back in 1993 to allow for the eventual inclusion of video in addition to audio.

At the outset of VSC Series development, Ivey recalled, "We knew we could do the audio and control, and take care of the conferencing, paging, and echo cancellation. So if we added the video piece, it would provide the consultant, integrator, or design/build firm with a full set of solutions for the mid market. And it would all be programmable and controllable with one single-and I might add free-software application."

The NWare component is huge, Ivey said. "We think that's very important in terms of controlling costs on jobs-being able to build simple and intuitive controls for the end user. And if the client desires any changes, they can be made within the same software application. You don't have to worry about changing any type of interface or control structure between a third-party device and your audio and video system."

The new MediaMatrix family of video products—presently comprised of the VSC-101tn, VSC-101, VSC-51, and VCAT-HD video scalers and switchers—include features and functionality that are founded firmly in real-world applications.

First among the feature priorities was the ability to handle multiple inputs. "We know that HDMI is going to be with us for a while, and there are also still obviously a lot of PCs in use in the types of applications that we were talking about, so we were looking for a number of VGA inputs as well and the audio that goes along with that," Ivey said.

It was also important that the technology would allow RS-232 and infrared control over the network. Further on the audio side, there's a mic and line level audio input and a 10W power amp onboard for local audio monitoring on the VSC 101 and 101TN models.

The VSC101TN, with its simultaneous HDMI and VGA output, also includes a network connection for HDBaseT. "We thought that was an important aspect of it because that allows you to go into a school, church, conference room, or boardroom and not only have your local output to a monitor but also to send up to your projector, and that also includes the serial and the IR controls out to that projector as well."

A range of other products allows for scaling the system up or down to meet various project needs. Demonstrations of the new MediaMatrix product at InfoComm were built around residential and commercial applications. On the home side, there were five control zones and one 7.1 home theater. Control of the music playback, levels, EQ, video switching, Blu-Ray player, was handled through MediaMatrix and NWare.

On the commercial side, a workbench setup allowed booth visitors to see MediaMatrix's interfaces for audio, video, and control options in putting together systems for mid-market applications.

Overall, consultants and integrators were impressed. "They were very interested to see that MediaMatrix had entered the video market," Ivey noted. "The reaction has been very favorable."