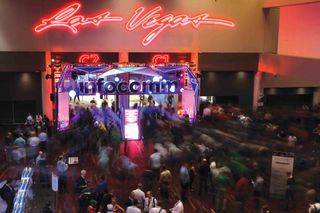 The biggest just got bigger: InfoComm 2018 was another show for the record books as North America’s largest AV industry gathering served up a wider range of education, new innovative experiences, and a broader tech focus than ever before.

Attendance figures, released at the end of the day on Friday, were close to 43,000—a 10 percent increase from the last Las Vegas hosted the exhibition, according to AVIXA. And the show keeps growing in terms of scale, as well.

“It’s the largest show floor from an exhibitor space that we’ve ever had,” said David Labuskes, chief executive officer, AVIXA, referencing the 550,000 square feet of exhibits, demo rooms, and special events space, making it the biggest InfoComm ever.

"It was another fantastic week for a show and an industry that never stops innovating," said Jason McGraw, CTS, CAE, senior vice president of expositions, AVIXA. "We continue to develop new offerings that celebrate and explore in-depth the many facets of technology experiences. Our exhibitors took the lead with solutions that continue to push the envelope of what AV can deliver, and our many subject-matter experts and thought leaders contributed to a program that gave all attendees the opportunity to think differently about the role audiovisual technology plays in people's lives."

Exhibitors, which numbered 964 in total, featured some prominent newcomers including Google, Microsoft, Dolby, Lenovo, Intel and Dell, reflecting the growing intersection of AV and IT, as well as crossover with the residential technology sphere—a trend encapsulated in the show’s Integrated Life pavilion.

From Emerging Trends Day and the TIDE conference on Tuesday to the expanded slate of technology tours throughout the week—including behind-the-scenes looks at Cirque du Soleil shows—opportunities for education and inspiration away from the show floor abounded.

Inside the convention center, novel additions like C2 joined popular returning attractions like Center Stage to further enrich the attendee experience and stimulate their drive to innovate long after the week is over.

“Make sure that what happens in Vegas doesn’t stay in Vegas,” Labuskes said. “Take it back with you to every meeting with your peers, whether you’re an AV technician or a CEO.”