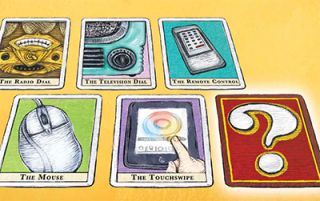 Smartphone ownership in the U.S., currently at 57 percent and rising, has had a real impact on AV control systems manufacturers and third-party developers, as a significant percentage of the population has become increasingly familiar— implicitly, if not necessarily explicitly—with the design concepts of the user interface (UI) and the user experience (UX). With over three-quarters of the smartphone-owning population spending 22 hours a day with their devices, according to recent research, it was really only a matter of time before the UX associated with iOS and Android devices became the benchmark by which other electronic devices in the home and at work would be judged.

Smart handheld devices have certainly set the public’s expectations of what a UI should be, according to Nic Scott, marketing solutions manager with Crestron. “They’ve developed intuitive user interface experiences. We need the touch screens to be more like the mobile devices people carry with them every day.”

Apple and Android user interfaces have helped Crestron develop a better solution for its customers, said Scott. “The apps that are out there have shaped the capabilities of the platform. We’ve introduced new features, including gestures and many animated effects, due to the prevalence of Apple and Android adoption. We revamped our touch screen user interface with the introduction of Smart Graphics, our new advanced touch screen GU I framework that delivers amazing graphics and a richer user experience.”

“We’ve seen a fairly consistent UI standardization emerge in the market around the gesture-based UI,” observed Eric Neilson, senior product manager of user interfaces at AMX. “At AMX we took that highlevel standard and then applied it more specifically to control, which resulted in the Pantastic UI, a fully gesture-based UI for the Modero X Series. It’s really changed how people use device control systems. Instead of thinking of your control console as a menu-driven type of interface, people now see the control panel as a more natural extension of themselves.”

One of Apple’s great contributions to technology has been the UX, according to Neilson, and the simplification of humandevice interaction. “In the AV world, especially as media sources increase in complexity, it’s very common to see equipment installations where the technology gets in the way of a pleasing user experience. Once everything has been installed and the cabinets are closed, the only things the end user sees are the user interface and the monitor. This can be either our point of success or our point of failure. Keeping things simple and intuitive, like the Apple products, is the best way to bring out a positive user experience.”

But design tools on their own do not guarantee a satisfying UX, warned Steve Greenblatt, president of Control Concepts. “I think you can design very nice layouts and a good user experience with any of the tools, but you can also design a very poor one with any of the tools. Crestron’s Core 3 SmartObjects gives the novice designer an easy way to design decent touch panels. However, you can still design poor ones—or, ones that are as nice, if not nicer—with tools that are not in that package. It goes back to having good aesthetics and a good eye for it, and also knowing what works and what doesn’t with your client, and developing a successful model based on past experience.”

As a result, professional integrators continue to play an important role in the design process, according to Pete Baker, vice president of sales and marketing at Remote Technologies, Inc. (RTI), specifically: “To help the consumer navigate the different options that are available; to ensure that the system will be installed properly and, most importantly, at the end of the project, that it’s going to be intuitive and will provide an enjoyable experience for the end user, and not a frustrating experience.”

Crestron demonstrates mobile device integration with control systems via near-field communications (NFC).Many consumers believe that they simply need to download an app into their smart device and they will be able to control the electronics in their system, continued Baker. “I think that’s only half the story. Without involvement from an experienced professional integrator I think that the user experience will be greatly compromised. I think that it’s important for integrators to drive some of the decisions with the consumer—because they are the experts, and at the end of the day they are responsible for how intuitive and enjoyable the user experience is for their consumers.”

But integrators should be mindful of focusing too heavily on price, he also warned. “Price is important and you must respect budget numbers and guidelines, but it’s also important to emphasize the control element in the final result of the project.”

One useful benefit derived from the smart device UX by the professional AV industry is the personalized UI, said Neilson. “You now give the user access to their personal data like contacts and documents at the source of control. This is one of the reasons we have equipped the Modero X panels with near field communications [NFC]. As more and more mobile devices begin to deploy with NFC, we see scenarios where users tap their phone on the control panel in the conference room to authenticate, then have full access to their personal data in addition to dedicated meeting room control.”

NFC, common on many smartphones, will increasingly be added to AMX products, he continued. The technology has several uses: “Using either an ID tag, a mobile phone, or any NFC-enabled device, a user can authenticate to a touch panel or some other piece of equipment and then use the system. Since every NFC tag has a unique ID, users can experience a different UI depending on their needs. For example, an IT admin might see a touch panel interface with diagnostics information enabled, while a standard user might just see just the room controls. And you can use the unique ID component of NFC to bill the departments who use the facilities accordingly.”

The AMX Modero X Series line of device control systems runs on the fully gesture-based Pantastic UI.Video game technology such as Nintendo’s Wii and Microsoft’s Kinect are also having some influence on AV control system design. “We have the T2X, which is a new handheld controller, that will have a built in accelerometer that is intended to support future movement control,” said Baker. “Wave your hand to the right to fast forward, or to the left to back up a video. Raise your hand up or down to pause or play a PowerPoint or a video.”

The controller also has grip sensors: “When you pick it up it lights up automatically; when you put it down it goes back to sleep. It also offers tactile control, which you can’t find on tablets or smartphones. That’s important for transport functions,” he noted, so that the user doesn’t have to constantly glance between the display and the controlling smart device.

With technology advancing so rapidly, future-proof functionality is critical to continued business success. “You can’t be just thinking about what you want the system to do today,” stressed Greenblatt. “You really have to be thinking about what you want it to be doing a year or two down the road, and be able to build the model of your user interface to accommodate changes and be scalable, and also be consistent across different platforms in your facilities.”

Steve Harvey (sharvey.prosound@gmail.com) has been west coast editor for Pro Sound News since 2000 and also contributes to TV Technology, Pro Audio Review, and other NewBay titles. He has over 30 years of handson experience with a wide range of audio production technologies.

A World Without Interfaces

Recently a young designer from inside the professional user experience (UX) world created a stir by evangelizing that “the best interface is no interface.” The enigmatically named Golden Krishna used social media and a talk at SXSW Interactive to spread the #NoUI word. This campaign may sound a bit like a Zen koan—how can people interface with technology without an interface? But Krishna’s primary point is that we have become too dependent on screens to achieve our goals. Too often the answer to technology interaction is “put a screen on it.” If you look closely, though, you will see that screens often place us further away from our goals, not closer.

An example Krishna gives in his SXSW talk are phone apps that open car doors. He points out that using an app to open a car door takes 12 steps, such as “wake up my phone,” “enter the password,” “find the icon,” etc. In contrast, people who have wireless key fobs in their pockets (a “screenless” experience) take two steps: 1) walk up to the car, 2) open the door.

The grandfather of usability, Donald Norman, wrote a book in 1998 called The Invisible Computer, where he explains this phenomenon by giving an historical analogy. Earlier last century people would purchase a motor from the Sears and Roebuck catalog and use it for multiple things such as running a washing machine or a sewing machine. Eventually these motors would become affordable and reliable enough to be built into the washing machine so that the user would just turn the machine on. An external motor was no longer required.

A similar thing is happening with computers, but we are just in the middle of it. An example of a relatively successful embedded computer is the Nest thermostat. You turn the temperature up or down by twisting the face of the front panel and eventually it learns what you like (through machine learning), knows when you are home (through sensors), and starts working automatically. No screen interface is required. In contrast, placing a screen on a refrigerator or oven often makes life more complex (e.g., where is the menu with the option to turn off the ice machine?).

Golden Krishna has three principles that he suggests we consider to achieve better experiences without interfaces. 1) Embrace the typical process (instead of screens), 2) Leverage computers instead of catering to them, 3) Create a system that adapts to individuals. By keeping our focus on the needs and goals of the people using audiovisual systems, we can hopefully live in a world without computers and with objects that help us achieve our goals and improve doing so over time.

Paul Chavez (paul.chavez@harman.com) is the director of systems applications for Harman Pro Group. He is a usability evangelist and a futurologist, and has taught and written on the topics of interaction design, audiovisual design, and networking.v