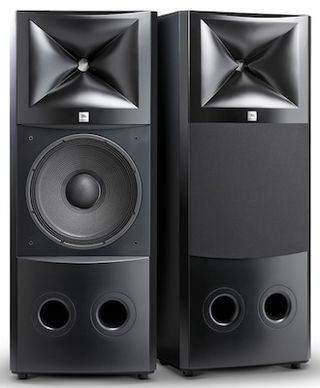 If I were to compose a telegram from the NAMM show it would read like this:

And bring products to market, Harman did. A complete new line of Soundcraft consoles and a fancy new JBL M2 reference monitor were among announcements, and every Harman brand emphasized efficiency both in terms of feature sets and prices. And if you want to instantly add wireless control and monitoring capability to your legacy installs, just add the Crown USBx.

That's also the modus operandi of a certain brand known as Behringer, which also debuted a line of digital consoles built on its X32 platform at NAMM. Each model culls from the expertise of fellow Music Group brand Midas to present tried and tested mic preamps and networking options. A circle of all the new X32 products was networked via Cat-5 and ran the gamut from the original X32 through the X32 Producer, Compact, Core, and Rack. In descending order, each piece of hardware lots knobs and faders in favor of iPad or PC/Mac operation.

Elsewhere on the show floor, other partnerships were also forming more efficient product offerings. PreSonus' partnership with Fulcrum Acoustic has produced "a whole new ecosystem of products based around active integration," said Steve Oppenheimer. Huge amounts of DSP and wired and wireless integration are again a part of the buzz here, and with Dave Gunness' TQ algorithms, "every speaker has a computer in it," Oppenheimer noted.

Upstairs in the demo rooms, doing more with less boxes was also the name of the game. Mackie presented its addition to its 2012 show-stopping DL1608 family with the new eight-channel version, the DL806. Portable tablets and mobile phones were also captivating attention here, with the new Mackie Master Fader and My Fader "redefining portability," as senior vice president John Boudreau put it.

Roland Systems Group is also "mixing things up" with its latest V Mixer, the M200i, which integrates hardware with an iPad. If you're looking for some streaming with your video, the new e40 HD entry level multiformat mixer, will be popular with school and house of worship clients. Rob Read, marketing manager with Roland Systems Group, also spoke to the "democratization of price points," across product lines from entry level upward, "lowering the cost of entry into the digital format."

Shure also introduced products across market ranges, with two new entry-level wireless systems. But in keeping with the theme of packing products full of features, the GLXD 2.4 GHz digital wireless system has all sorts of nifty options like battery chargers in both the receiver and in a car charger model so you'll never show up without a voice. Oh, and the GLXD6 wireless guitar pedal tuner and receiver wins for cool new implementations of technology. A stomp box that controls your mic and helps you tune? Come on, that's kinda rock and roll.Next up in the "solutions" category are the huge array of products presented at Radial Engineering's booth. The "Stage Bug" series offers all sorts of fun little alternatives to more expensive DI products. So if you need a quick fix, check them out.

And over in the "more inside" category, Tascam presented it's big ol' PA-R200 AV receiver, which packs eight HDMI inputs and has "Spotify Inside". Tascam is also distributing Cabasse speakers, a French brand that seems to make a product for every kind of install, with magnetized mounting systems.

More with less is also the name of the game at Line 6, where the new L2 speakers is scaled down and lighter, but "deeper" with more DSP. That was the original intention of the launch of Line 6, "solving problems," said Mark Williams, public relations and social media manager.

So go forth and do more with feature-packed products, and solve problems. Sell systems, not boxes, and live the convergence dream.