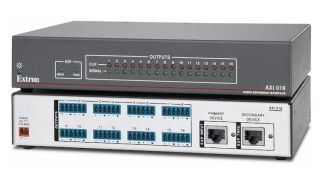 The What: Extron Electronics has begun shipping the new AXI 016, a sixteen output audio expansion interface for DMP 128 Plus audio DSP systems.

The What Else: The AXI 016 connects to the EXP expansion port on the DMP 128 Plus, transforming the matrix from an eight-output device into a 24-output device. Since all of the low-latency DSP processing occurs within the attached DMP 128 Plus, no separate configuration is needed for the AXI 016. The AXI 016 audio expansion interface also supports audio DSP systems that integrate a DMP 128 Plus and a DTP CrossPoint matrix switcher.

"The AXI 016 addresses the growing demand from our customers for the ability to expand the number of outputs on a DMP 128 Plus System with a very cost-effective solution," said Casey Hall, vice president of worldwide sales and marketing for Extron. "By leveraging the DMP 128 Plus system with its ProDSP and flexible mix matrix, the AXI 016 expands system capabilities with 16 additional outputs in a small 1U, half rack-width product."

The Bottom Line: The AXI 016 provides a tool for AV system designers to create DMP 128 Plus systems that support larger distributed audio applications that were previously not possible using a single DMP 128 Plus DSP processor. The DMP 128 Plus models feature an extensive mix matrix allowing all outputs—including the 16 expansion bus outputs used by the AXI 016—to be discretely sourced and routed from any input. When used with a DMP 128 Plus AT model, Dante audio sources can also be processed and routed to the outputs of the AXI 016.