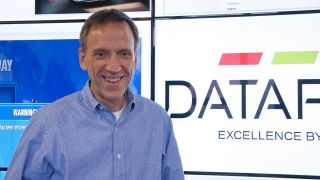 “Designed to complement the already comprehensive range of products that we offer here at Datapath, this acquisition underlines the importance we place on the growth of the collaboration market in operation centers and control rooms; in fact, in any collaborative business environment,” said Bjorn Krylander, managing director of Datapath.

MOSAIQQ was founded in 2009 by Anders and Nina Nancke-Krogh, both former Nokia employees, who sought to steer their careers in a different direction once Apple had released its first-generation iPhone in the summer of 2007.

“Touch technology really set our minds racing, particularly with regard to the potential benefits for big display applications,” Anders said. “This is why we created MOSAIQQ.”

The company set about developing software with wide appeal for those working in operation or command and control centers, enabling them to use a video wall as a large, shared desktop that would offer a number of different functions. These include the ability to collaborate, assign, and delegate tasks instantly, in real time, without the need for the cloud; simultaneous interactivity within the same application by multiple users; and the mixing and matching of sources regardless of from where they originate.

“Collaborative working requires a slightly different way of thinking,” Anders said. “To be able to move windows between computers like passing a book from one desk to another opens up many possibilities, especially with computers connected over a network.”

Among early customers of the patented software were a worldwide leader in IT and networking, a global petroleum company, and an international aerospace and defense specialist—all Fortune 100 companies. Now, with the acquisition of the MOSAIQQ, Datapath is taking this software developed for large multinationals and integrating it with its own WallControl 10 product to make it accessible to the mainstream video wall market.

“In effect, we are extending WallControl 10 by adding interactive features that will be highly valuable to control rooms, meeting rooms, and collaborative/information sharing environments, which have more responsive needs,” Bjorn said. “This represents one step on Datapath’s journey to move with purpose into the collaborative marketplace, and customers can expect further developments moving forward.”

Datapath will have more to reveal about the new application sharing software following its official launch at InfoComm 2017. The product is scheduled to be available for shipping by September 2017.