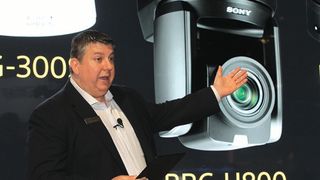 Sony kicked off the first day of InfoComm with a press conference just before the opening of the show floor Wednesday, bringing some new thinking and new approaches for a company that has been front and center in the installed AV market as long as anyone can remember. With a twist on the much-used theme of “collaboration,” the company emphasized the collaboration between Sony product and solution engineers and Sony customers to address different applications with tools honed in different markets that can be applied beneficially for new approaches. Sound complicated? It’s not—it’s really about Sony leveraging its huge strength in the broadcast and display markets, historically, to take the best of technologies from those and other newer markets to create fresh approaches for education, corporate installed AV, digital signage and interactive collaboration.

Said Sony’s Mark Bonifacio at the press event:p “We have increased relationships with colleges and universities, for example, and have gotten feedback on what they need on a broader level—not just an individual project level. And we’ve taken our experience from pro cameras and switchers, for example, and brought that to pro AV. We’re getting great feedback on making larger ecosystems more collaborative from the design stage onward.”

In the projector market alone, Sony now has 16 different models of laser projectors (laser phosphor) from 2K to 7K lumens. Sony said today that they saw 40 percent growth from 2015 to 2016 of their laser projector sales. And Sony made a big splash in the digital signage/large display market when it introduced its Canvas Crystal LED display, a “micro LED” technology, last year. It’s front and center at the Sony InfoComm booth, and it’s even better now. The (approximately) 1.2mm pixel pitch LED wall actually looks more high res than that, because of Sony’s unique “99 percent black” area on the surface—due to the fact that each RGB LED emitter is much smaller than on other LED walls. The result is tiles joined with no “seams” showing, deep blacks and great off-axis viewing due to the LEDs being embedded in the substrate and not surface mounted as in competitors’ LED.