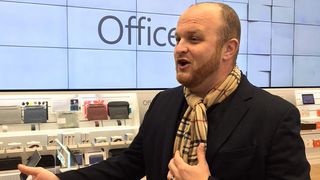 With 330 displays, not including single screens or its outward facing “culture wall,” Microsoft’s Flagship Retail Store in New York City keeps team members on their feet. The six-story facility is a multipurpose building which includes the obvious retail space, an entire floor dedicated to Dell products, a live gaming studio, and even a mixed reality demo space.

Microsoft’s Florin Gale kicks off the store tour during NYDSW.

First impressions matter and a bold statement is made by the aforementioned culture wall. The wall, which faces the busy 5th Avenue, is embedded into the building’s structure. As part of the company’s commitment to the city, the content is, at all times, an “art install” by a local artist. The massive video wall is designed to create an “illusion of depth” and blend into the architecture of the store, according to Florin Gale, Microsoft’s creative director. The artful video wall, updated at least quarterly, is a commitment to Microsoft’s pledge to be authentic and creative.

That promise is also a challenge. Gale said “Content and creative is what I’m grounded in, but content was the problem.” Working diligently with partners and his team, Gale began to generate content faster. As they collaborated, content strategies became seamless for the team.

With this content-centric strategy, Microsoft has been able to realize its digital-signage heavy retail locations. The company has even created “Store Zero” where the creative team can preview its content in a virtual store setting to ensure it fits the needed format.

With its passion for UX, concept testing, and tenacity, the creative team at Microsoft has created a dream retail experience, and one they plan to replicate. The company just announced plans to open a flagship store in London, in Oxford Circus. The location plans to be more than a retail store—it will be a dynamic hub for the community. Cloaked in an air of mystery—Gale would not share its exact opening date.

Megan A. Dutta is the editor of Systems Contractor News. Engage with live updates from NYDSW via https://twitter.com/SCNmag.