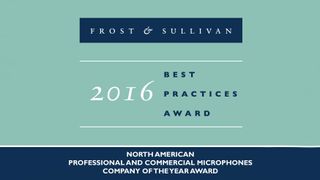 Based on its recent analysis of the professional and commercial microphone market, Frost & Sullivan named Shure Incorporated the 2016 North America Company of the Year. Shure’s extensive presence in the microphone market in North America, with a share of more than 40 percent, and its strong brand equity were among the determining factors.

Shure has consistently demonstrated a keen understanding of customer and market trends, enabling it to be among the industry leaders in the transition to digital wireless technology. The company’s premium wireless lines, such as Axient and UHF-R, are used in live concert venues and television shows, as well as for special event broadcasts such as the Super Bowl, the Grammy Awards, and U.S. political conventions.

“The military specification quality standards that earned Shure the U.S. government E Star of Excellence in World War II were not relaxed even after the war and continue to be the foundation of its product developed efforts,” Saayed noted. “In the following decades, a number of best practices were used internally to improve business processes as well as externally to guide customers and potential customers to better use and deploy Shure technology.”.

Each year, Frost & Sullivan presents this award to the company that has demonstrated excellence in terms of growth strategy and implementation. The award recognizes a high degree of innovation with products and technologies and the resulting leadership in terms of customer value and market penetration.

“We are honored and grateful to receive this coveted award from Frost & Sullivan,” said Shure Incorporated president and CEO, Christine Schyvinck. “And proud to be recognized by a globally reputable firm that focuses its analysis on innovation and growth.

“Since S.N. Shure founded our Company in 1925, it has been our philosophy to develop products and business practices of the highest quality. As we mark more than nine decades of innovation in the audio industry, this award is a fitting tribute to our company’s visionary associates, past and present.”