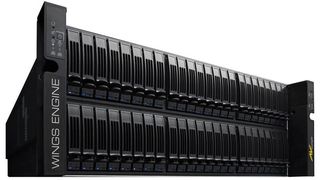 The What: AV Stumpfl will present its uncompressed 8K and 4K RAW server systems at this year’s IBC exhibition in Amsterdam, Netherlands.

The What Else: RAW servers can display video content using a full 12-bit color depth, delivering more color information than the current media server standard, which is particularly interesting for broadcast studio setups using the latest generation of LED displays.

The render engine allows for the use of high frame rate footage of up to 120Hz and makes it possible to create seamless 8K softedge blending panoramas. Native image sequences like TGA, DPX, or TIFF can be used without any need for converting them into an intermediate codec format.

RAW servers can be equipped with two-, four-, or eight-channel 3G-SDI input cards that support formats from SD (PAL, NTSC) to 3G-SDI (1080p) per channel. The individual channels can be combined for capturing 4K at up to 60Hz either using the Square Division or the 2-Sample Interleave method. The new input card options also make it easier to integrate RAW media servers into existing 4K broadcast workflows.

"When it comes to the development of next-gen broadcast workflow components, we are really living in an exciting time,” said global business development manager Helmut Protte. "On one hand, many traditional networks are still thinking in terms of HD, but the demand for media server systems capable of playing out uncompressed 8K is already here right now. As we get closer to 2020, we will see more and more setups that will require systems like our RAW server for processing uncompressed video at high frame rates and with a color depth beyond 8-bit."

The Bottom Line: The Wings Engine RAW media server is capable of playing out four simultaneous streams of uncompressed 4K (4:4:4) content at 60Hz, making it suited for use in a variety of applications in different branches of the AV industry.