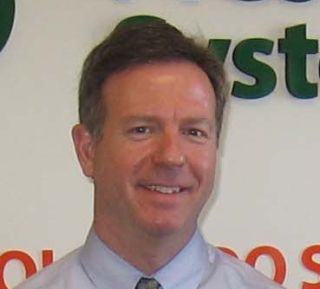 Chris Gamst.
The analog sunset
In 2009, consumers lost the ability to receive television signals via analog channels. Whether you liked it or not, TV was going digital. The change gives consumers higher quality video and sound, and also allows for easy integration with other digital devices, such as DVD players, wireless internet, and gaming systems.

The switch from analog to digital continued as content providers moved to protect their property and discourage illegal copying. This transition has been colloquially referred to as "analog sunset." The Advanced Access Content System (AACS) was created in response to this, and is backed by Disney, Intel, Microsoft, Panasonic, Warner Bros., IBM, Toshiba and Sony. The AACS set into effect a timeline for phasing out analog connections, specifically in Blue-ray Disc (BD) players. The analog sunset stated that by the end of 2013, new BD players cannot have analog outputs. This date is rapidly approaching; it will mark the end of analog.

The analog sunset began in 2011 giving BD players the control to downgrade video to standard definition when transmitted through analog connectors. While some people may still have and use older BD player models, they will need HDMI cables to view video in high definition. Additionally, to ensure people are not continuing to use their analog connectors, all new BD DVDs will have software Image Constraint Token that will trigger a standard definition video stream when played over an analog connection. This is one of many steps content providers are taking and will continue to take to protect their property.

Effects of the setting analog sun on commercial AV
On the surface, it may not seem to affect commercial AV integrators and our clients, since the analog sunset only applies to the protection of consumer media. In reality, it does affect us in several ways. Many customers already have BD players integrated into their AV systems or have a BD player in their computer or laptop. Additionally, major computer manufacturers have announced they will be ending support for VGA. Some have already removed the VGA connections and have standardized on HDMI, DVI or DisplayPort.

With the analog sunset end date only months away, we are working closely with our customers to ensure their systems continue to operate as intended. For existing systems, cable adapter options are available to make current technology work. The Crestron DigitalMedia system is one option that allows for any source—analog or digital—to be converted to HDMI.