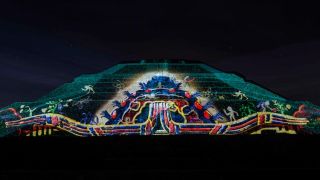 Each 45-minute show consists of a number of visuals projected onto the Pyramid of the Sun, then along the Avenue of the Dead, and finally reaching the Pyramid of the Moon. A total of 19 Christie Roadie 4K45 projectors illuminated the site with 20 million different color tones, enlivening the projection-mapping show, which is accompanied by the voice of a narrator telling the history of the Teotihuacan culture.

With a duration of 45 minutes, the 280 presentations of Nocturnal Experience in Teotihuacan held to date have been a joint effort of Christie and Cocolab, which worked for a year prior to the opening on creating the mapping visuals in collaboration with the Tourism Department of the State of Mexico, aided by the advice of INAH (National Institute of Anthropology and History of Mexico).

After putting in place a team of researchers, storytellers, lighting designers, scriptwriters, animators, programmers, and engineers, Cocolab created a nocturnal experience for the Teotihuacan archaeological site, developing the technology and contents for the show, concerning the Teotihuacan culture.

The Christie projectors are placed in two mobile units, and are run from Mac Pro units using NUUP software developed by Cocolab. The total brightness of the image powered by the 19 projectors was in excess of 850,000 lumens, an impressive figure never before seen in Mexico, according to Christie.

Christie Roadie 4K45 projectors with 3DLP technology feature a native 4K resolution at 60Hz (upgradeable to 120Hz) and can project 45,000 lumens, making them among the brightest lamp-based projectors in the market. They also feature Christie TruLife technology for enhanced color and image fidelity.

In addition, the Roadies integrate warping and blending capabilities to facilitate mapping pixels on any surface. “They are really fantastic,” said Alejandro Machorro, founding member at Cocolab, “and guarantee us the brightness and quality we need to deliver the unique experience this project called for.”

Ernesto Armus, general manager, Christie Mexico, echoed Machorro’s view: “We are delighted that our Christie Roadie 4K45 projectors have contributed to this stunning projection-mapping show, which is sure to linger in the audience’s minds for a long time. It’s not often that you get to see such a large number of powerful projectors in a single event in Mexico.”