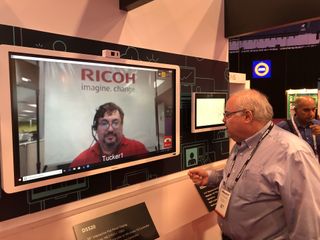 Over the past few years, there have been few more prominent buzzwords in AV than “collaboration.” As manufacturers across the industry step up to fill the seemingly insatiable demand for more productive teamwork, the market has been flooded with hardware solutions—and king among them is the touch-enabled flat screen display.

From giants like Microsoft to the smallest of startups, there seems to be hundreds of choices when it comes to interactive collaboration displays. How do you know which one will bring the most value in the long term?

For Ricoh, the answer is simple: pick the solution that everyone knows how to use, and uses every day. And in 2018, it’s positioning its offerings to be just that, with the initial launch of the Ricoh Smooth Collaboration Service.

“This kind of technology has been around for a long time; for the past 15 years people have been buying it, and having trouble utilizing it,” said Glenn Laverty, SVP of marketing at Ricoh Americas (and president and CEO of Ricoh Canada) of the now-ubiquitous interactive display. “And we’re trying to solve that problem. Take the first 10 minutes of meeting, for example—people figuring out what to do, how to plug things in.”

Making technology intuitive and accessible is a great start for boosting usability. But what happens when something inevitably fails, or you forget how to complete an operation? This is where Ricoh is turning its focus, by adapting an aptitude that has helped the company to excel for decades in the business of printing: managed services.

“It’s a huge part of our business—we probably have almost 9,000 employees situated at customers’ locations,” Laverty said. These managed services teams stand by for situations from paper jams to workflow overhauls, to ensure companies remain at full productivity. “And now we’ll be picking up and taking on responsibilities in assisting them in terms of the IFPD [interactive flat panel display] and the AV components associated with their need to keep that stuff current, and to maintain it in such a fashion so that they can use it in their collaboration efforts.”

Need help even faster? Another element of Ricoh's expanded solutions to help the end user is its Live Tech Support feature, which was demonstrated at InfoComm 2018. Users simply press a button on the display, and they’re connected via video chat to a live representative from the company’s Atlanta-area offices. The representative can then talk the user through a particular task, or even remote into the device to show them how to do something.

This focus on providing ongoing support for end users of AV technology is one of the most important trends in the industry—the acknowledgement that these systems are like living creatures that must be cared for, and cannot simply be installed and forgotten about. It’s also one of the chief considerations Joji Tokunaga, president and CEO of Ricoh Americas, has heard from clients with whom he’s met since his promotion to the company’s helm in April.

“It’s not necessarily the salespeople that make companies fundamentally different,” Tokunaga said. “I think customer satisfaction [at the time of purchase] used to be important, but customer experience is becoming more and more important.”

Ricoh is making a push to differentiate itself from the myriad other collaboration hardware providers in terms of user experience in other ways, too. In late 2017, it shifted to an open-architecture platform based on Windows 10 that allows its IFPDs to communicate with essentially any other kind of internet-connected device. And this year, the company is looking to finally roll out its integration with IBM Watson, which can do things like transcribe meeting dialog in real time, in multiple languages.

But ultimately, Laverty feels that even the most profound user enhancements are for naught if an organization doesn’t know how to fully utilize them.

“If nothing changed, and all of this hardware had all of these capabilities but they weren’t used, it’d be immensely wasteful,” he said. “If collaboration is going to be a cornerstone of how we do business in the future, [Smooth Collaboration Service] becomes instrumental in terms of what we’re going to do.”