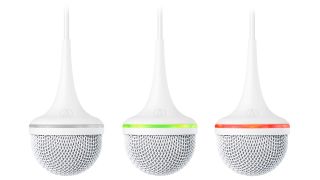 The What: Audio-Technica has begun shipping the ES954 Hanging Microphone Array, which is designed for huddle rooms, conference rooms, and other meeting spaces.

The What Else: When controlled by the Audio-Technica ATDM-0604 Digital SmartMixer, the four-capsule microphone array provides 360-degree coverage through virtual hypercardioid or cardioid outputs that can be steered horizontally and tilted vertically. When using the ATDM-0604 Digital SmartMixer, the graphic interface enables control of the width and orientation of each virtual polar pattern, which may be steered in 30-degree increments, with a tilt function accommodating differing ceiling heights or users that are sitting/standing.

A simple setup might include a single ES954 over the center of a conference table configured from the mixer to provide coverage via four identical quadrants. Used in conjunction with a gate on each microphone channel, the system could be configured to automatically follow anyone talking while moving around the space.

Alternative seating arrangements in the room can be accommodated by reorienting each of the four microphone patterns in the mixer’s software. Different seating configurations and associated coverage patterns can be saved as presets in the mixer for quick recall. In larger rooms, multiple ES954 microphone arrays could be installed—for instance, one at each end of a long conference table—and the polar patterns of the multiple microphone arrays steered and widened or narrowed accordingly.

The Bottom Line: Intended primarily for videoconferencing applications, the ES954 may be used singly or in multiples to capture every person speaking in a room, with the total number of channels restricted only by the capacity of the mixer or DSP device controlling the system.