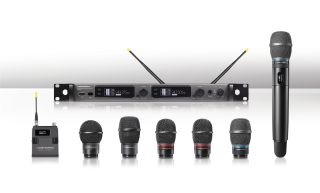 The What: Audio-Technica is now shipping the ATW-T6002x Handheld Transmitter for the 6000 Series High Density Wireless System—a solution that allows users to pack 31 channels in 4MHz of bandwidth.

The What Else: The ATW-T6002x handheld transmitter offers extremely low handling noise and features a metal construction body, high-visibility OLED screen, soft-touch controls and switchable RF power (2mW/10mW/50mW). Its industry-standard thread mount allows for the use of six new interchangeable A-T microphone capsules, as well as other compatible capsules.

The Bottom Line: To address the 2016 FCC Incentive Auction that repacked the broadcast spectrum, Audio-Technica developed the 6000 Series, whose channels are spaced at 125KHz intervals and can all be used simultaneously. The system operates in the 944-952MHz band, which is free of broadcast TV. The FCC has expanded license eligibility for this band beyond broadcasters and content creators to include sound companies and venues that routinely operate 50 wireless microphones or more.