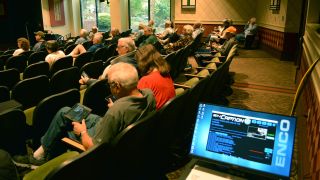 Sun City Lincoln Hills, a 55-plus community with a population of 11,500 near Sacramento, CA, recently deployed the AI-powered ENCO enCaption4 closed captioning system for its board of director meetings. (Image credit: ENCO)

With an estimated 50 million adults over the age of 65 in the United States, the boomer generation continues to have an outsize impact on American society. According to Pew Research, 10,000 people retire every day. This population increasingly looks to live out their golden years in places that provide a wide range of community activities, events, services, and even governance. These residential developments often face higher demands for effective communications geared toward those who are hard of hearing. The Sun City Lincoln Hills active adult community has embraced high tech solutions to support residents in this capacity.

Sun City Lincoln Hills is a 55-plus population of approximately 11,500 northeast of Sacramento, CA. As a premier location for weddings in the region, the grounds include an outdoor amphitheater overlooking a lake spanning two golf courses. The homeowners are part of a community association that is governed by a membership-elected volunteer board of directors. Under the board, there are several major committees, meeting multiple times each month to oversee a range of ongoing affairs in the community.

There are two major lodges with meeting facilities at Sun City. One has a multi-purpose ballroom that is used as a lecture theater and for other functions accommodating up to 450 people. The other has a smaller presentation hall with 150 permanent seats. Both meeting facilities are well equipped with audio, video, and lighting technology.

In the spring of 2019, Christopher O’Keefe, executive director at Sun City Lincoln Hills, tasked audiovisual systems integration expert and Lincoln Hills resident volunteer Peter Beckett with finding arrangements to improve accommodations for hearing impaired residents allowing them to participate more fully in meetings of the board of directors and the several committees which advise the BOD.

Sun City had been using a few different audio boosting technologies for this purpose, but users considered them inadequate and were requesting a better option. “If they're truly hard of hearing, if they're lip-readers, those boosted audio solutions are non-starters,” Beckett said.

Beckett investigated a range of solutions, including a manual stenographer. The latter required up to a month’s notice of a meeting to provide support, which was impractical for Lincoln Hills. Beckett’s research led him to ENCO’s software-defined enCaption4 platform, which quickly and cost-effectively automates closed captions for live and pre-recorded content.

Beckett architected a portable cart for the open captioning workflow that is convenient for use in the various meeting locations. enCaption4 was built into the cart, along with a Wi-Fi router and a Teradek Serv Pro device for video streaming. The captioned video is served to iPads that Lincoln Hills participants request for use during meetings.

The meetings are recorded with the live video fed into enCaption4, which automatically adds captions and outputs SDI signals to the Serv Pro for streaming. The iPads are stored and charged in a drawer of the 19-inch equipment cart. The recorded video with embedded audio and closed captioning is later posted to the resident website as part of a transparency initiative enacted by the governing committees and board.

Typical use involves O’Keefe, as the primary presenter, calling upon various participants to share their expertise on a particular topic. These meetings generally feature three to four people contributing to a presentation. The enCaption system interprets the audio and captions the content in just a few quick seconds to the participants watching on iPads.

The enCaption system uses ENCO’s latest enhanced speaker-independent deep neural network-based speech recognition engine to inspect and transcribe the audio in near real time. The system learns local places and names to improve accuracy. Beckett is particularly fond of the feature that has allowed him to create a custom dictionary. He has added resident- and location-specific names to the dictionary to ensure they are spelled correctly in captions.

The Sun City Lincoln Hills residents have found the enCaption4 to be extremely accurate with its captioning. Beckett uploads the recordings to YouTube as unlisted files, which residents access through the Sun City website. “Now, with the open captions on the iPad, people have a very accurate interpretation of the proceedings, available on their laps,” Beckett said.

Since the system has been so well received, and there was additional time remaining in the 30 hours that Sun City licenses per month, use has been expanded to other forums where speakers visit to discuss more general interest topics.

“I’m extremely pleased by the high-quality captioning produced by the ENCO enCaption system to serve our hearing-impaired residents,” O’Keefe said. “I’ve done some research, and I do not know of any other organization comparable to ours that provides this sort of advanced technology solution. I’ve been excited to share our success with the executive directors of the other communities in our network.”