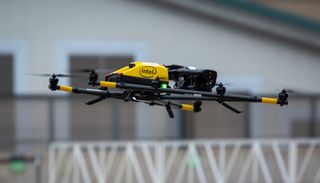 Drones may fly high but Kevin Kelly, president/COO, Stampede, has a firm grip on their presence in the AV industry.

“History has shown time and again that the adoption of new technologies is driven by enthusiasts, passionate early adopters who see the potential before anyone else does,” Kelly noted. “This is true in both the consumer and commercial marketplaces.”

New facets of commercial AV can begin as an idea in search of commercial validation, driven by a core group of companies evangelizing the benefits of new technology. “It's the visionaries who open the eyes of the mainstream systems integrators. This has always been the case,” said Kelly.

That gradual adoption through specialists, followed by core adoption by traditional systems integrators is evident with drones. “The adoption rate for any new technology is always due, in part, to the appetite a traditional business has for taking on any new category,” he added. “Drone technology is evangelized by those with a personal interest in it and is driven by folks who get excited by it.”

Although systems integrators are not getting a lot of requests for drones at the moment, as education and government accounts start including them in their quote requests, integrators will incorporate them as well, according to Tim McPherson, sales manager, VSA.

“Integrators and installers will have to pursue the drone market and include drones in their repertoires to remain competitive,” he explained. “Right now, many systems integrators prefer to go with what they know. Sometimes it takes a customer to request a product for it to really take off. So, I don’t think it will be long before integrators start to include drones in their product lines. Especially as Amazon, UPS, and Fedex look to drone delivery for their customers.”

McPherson’s initial drone experience was for a sale to a government contractor. “They used a drone to record a spot for a new Humvee; it was a phenomenal video. Since then, I’ve seen a lot of cool videos taken by drones. Most of the major universities—including Penn State and the University of Nebraska’s HuskerVision—are using them.”

In addition to the education market, McPherson currently works with drone customers ranging from mom and pop videographers to the New York Mets, and houses of worship to communications firms and many amateur video artists. Most clients are interested in how drones can help them stand out from the competition.

Recently, VSA had a top-of-the-line drone project for a parks department that wanted to gain insight as to the health of its various parks without having its employees walk around the parks for hours, or even days. Using drones, the staff was able to see what upgrades and additions were needed in a matter of minutes or hours, and the collected data was readily available.

“From the AV integrator’s point of view, drone technology is something they are probably preparing for,” McPherson said. “Most Fortune 500 companies will partner with integrators when these types of projects come up for maintenance and other needs. Those who integrate and install production equipment, though, already know how drones can benefit the end user.”

“We see drones as a valuable tool to capture data safely, accurately, and efficiently,” said Cindy Ng, head of marketing, Intel Drone Group. “Our focus for the next generation of drone technologies is increased automation of both the data capture, and, more importantly, the data management and analysis. Managing and inferring insights from these large data sets is driving the digital transformation and will aid in the business decisions of enterprises across industries such as oil and gas, utilities, construction, and agriculture. We can expect to see emerging applications for this technology that help businesses automate everyday tasks and identify, analyze and predict issues in a way that could not be done before.”

If all new technologies engender a sense of anticipation and excitement, drones do so times ten. “Whenever you can interact with a product because of physical movement, it likens that product to playing video games with a lot of personal movement and direction,” Kelly said. “There’s a visceral feeling of linkage between the hand and eye control and movement. This visceral linkage, coupled with the growing awareness of economic and life-saving benefits drones deliver, will ultimately prevail in moving drones from the enthusiast era into the mainstream business of systems integrators.”

There are, of course, obstacles integrators face when adopting drone technology, he cautioned. “The challenges are some of the same ones that have challenged the development and advancement of every major technological innovation since the dawn of time; they include human resistance, human inertia, legitimate regulatory and safety concerns, licensing, and, yes, security concerns. Slowly, but inevitably, these challenges are being addressed in ways that are ensuring public safety and safety of operation. As they are being addressed, the concrete human and business benefits of drones are being discovered, tested, and proven in real world applications every day. It's this reality that is making drones an inevitable business component for systems integrators and this is becoming more apparent each day.”

The learning curve represents another obstacle for some integrators, McPherson said. “I haven’t seen a lot of marketing to integrators from manufacturers. If you’re like me, you have to have your hands on the product to get real world experience and learn how it applies to the industry and to your customers. As distributors or wholesalers we have to learn as we go. With so many manufacturers and with technology changing every day, I have to know a little about a lot of products.”

Typically, McPherson is on the phone with sixty or more clients per day, many of whom are communications professionals or videographers. “I bring up the advantages and disadvantages of drones in about 25 percent of these conversations.

Public opinion has been another factor challenging the industry, Kelly pointed out. “For the first year in which drones were a consumer product, it was all about privacy. Today, people talk about the economics of drones; they make money and save money. I know of an integrator who put together a drone system for Miami Beach lifeguards. The drones are equipped to fly a life preserver to someone in trouble and can reach the swimmer faster than a lifeguard can get to them.”

As the use of various mixed reality technologies grows within the pro AV community, drones will take part in more and more solutions. “If you can program a drone to do something then that drone can be part of an even larger solution that includes VR (virtual reality), AI (artificial intelligence), and smart tech in general,” Kelly said. “In fact, this is a great example of how one radical new idea—drones—suddenly becomes a more mainstream component of even newer, more radical ideas, VR and AI enabled systems.”

And it’s the human imagination that creates the big new breakthroughs, then limits them through fear and inertia, finally liberating them through the creation of the next big idea, he noted. “This is the history of technology. It always has been and, I suppose, it always will be.”

As an AV techie, McPherson is excited to see what experiences VR will provide by drone footage. “We’ll see an increase in drones for AV as costs go down and more people obtain licenses to operate them. The increase will be in the corporate market and in real estate as realtors use them more and more to showcase video projects from various, difficult to photograph, angles.”