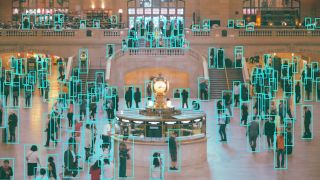 We may never feel as vulnerable as we do in a hospital bed. Amidst the chaos of hospital staff, the fear and confusion of trying to comprehend the medical issue at hand, and the flurry of friends and relatives who are struggling to find ways to be useful, it’s understandable then that we can feel overwhelmed by the simplest of needs—like knowing when we might get a meal.

“I can’t tell you the number of times a day I see a patient limp out of a room to ask what time lunch is coming,” said Dr. Judd Hollander, an emergency physician at Thomas Jefferson University Hospital in Philadelphia, PA in a video explaining their partnership with the IBM Watson Internet of Things. “If we can get them the answer without them having to come out and search for someone to answer the question, it’s a win-win for everybody.”

The hospital’s use of artificial intelligence has shown one of the many compelling ways the technology can improve people’s lives in meaningful ways. In voice enabled rooms from IBM and Harman Professional Solutions, systems may use Watson AI with Harman AKG microphones, JBL speakers, and AMX AV control and switching systems, allowing users to interact with cognitive technologies that are embedded in devices, which then access the Watson cloud and Watson IoT services, which in turn provide answers and can even interact with in-room subsystems. The results at a place like Jefferson Hospital include not just patients and families who are more at ease, but the ability of doctors and nurses to focus on medical needs, and not, for instance, room temperature.

“If we can help the patient in Room 20 without leaving Room 18 while that person’s having a heart attack?” Dr. Hollander said. “That’s why I went into medicine.”

And that’s just the beginning. The potential for AI includes things we haven’t even dreamed of yet, in verticals across the industry.

“The enterprise and entertainment market possibilities are massive, as IBM and Harman seek to connect people more intimately with their environments through cognition and natural language processing,” said Harriet Green, general manager, Watson Internet of Things, customer engagement and education, IBM. “We are leveraging Watson and AI to bring connected environments to a multitude of locations, from hotels to hospitals and offices, where they are transforming everyday experiences.”

That potential is only growing for the commercial AV industry, which is just gaining strides with the residential industry’s use of AI, says Richard Lewis, senior vice president, research and technology, at LG Electronics USA Business Solutions.

“As we see its growing popularity and incredible usefulness in the consumer market, businesses have begun to consider AI’s role beyond the home,” he said. “If I had to sum up the state of AI in the hospitality industry right now, it would be ‘exploration.’ With exploration comes both excitement and challenges. Commercial AI is still very much in its infancy as the industry continues to tap into and unveil the many exciting ways this technology can be harnessed for a more seamless experience in B2B applications.”

For its part, LG has been exploring the potential of AI through ThinQ, the umbrella name for its AI technology, which includes voice control and “basically learns and adapts over time,” Lewis said. Their approach with ThinQ, he explains, is for “open platforms, open partnerships, open connectivity,” which encompasses LG’s consumer smart home appliances and consumer electronics, as well as other consumer products outside the LG portfolio that utilize artificial intelligence.

“ThinQ provides convenience, control, and seamless connectivity at home and on the go, which we’re dedicated to providing through LG commercial display technologies as well,” Lewis said. “There’s been a big emphasis on simplifying and commercializing natural interfaces seen in the home, and as LG continues to drive innovation in the commercial display industry, we’ll also continue to consider the ways that our products enhance the end user experience and streamline the installation process for system integrators across diverse technological ecosystems.”

Despite the excitement about the possibilities, the commercial industry is at a crossroads. As businesses develop cool, innovative AI technologies, they should also make time to consider how those technologies fit into the overall picture of commercial AI, both now and into the future.

“The biggest challenge facing the commercial sector lies in defining AI outside the home, whether it’s natural language processing, hands-free display control, connectivity, or a combination of all of these,” Lewis said. “System integrators and manufacturers face the interesting and critical challenge of not only defining commercial AI, but also mastering the newly added layer of complexity that it adds to cloud-based processing solutions.”

When it comes to defining commercial AI, it comes down to the same question as in building any other technology: Is the user going to get any value from it? For Ricoh, which has also leveraged IBM Watson IoT, the approach to creating its Intelligent Workplace Solution, a cognitive-enabled interactive whiteboard, was to figure out ways for meeting participants to streamline discussions by using real-time analytics, language translations, the ability to capture side conversations, and more.

“Our goal is to provide employees and businesses with effective and smart tools that automate administrative office processes and empower people to focus on tasks and ideas that drive business value,” said Hidetsugu Nonaka, corporate senior vice president, Ricoh, in a statement. “Instead of being a screen, the cognitive-enabled, interactive whiteboard powered by Watson [is] an active participant, capturing meeting notes and action items, and building bridges between employees at different locations.”

Another example of creating value for the user comes from AdMobilize, which has developed a range of touchless technology products that provide real-time analytics by capturing information from the physical world, from the number of motorcycles that pass a given roadside billboard to the types of emotional responses from people who stop for information at a digital sign in a mall.

“Integrators are really embracing this for three main reasons,” said AdMobilize CEO Rodolfo Saccoman. “One is they’re able to generate additional recurring revenues by utilizing the technology as software-as-a-service, which sometimes can become generous for them. Two is they’re really giving their clients a cutting-edge, actionable technology. Third, those end users love it because they have an advantage over their competitors. The integrators look like superstars because they’re enabling their clients to really be on the cutting edge.”

Eliminating tedious tasks, increasing productivity and revenue, and generally making the user’s experience a little more pleasant, has all been, of course, the overarching goal of technology since its inception. The added complication of AI—and what’s at the top of mind for those who’ve been following the news in the past year—is keeping personal data secure. For instance, as it considers more commercial applications based on success in the residential market, LG’s approach to privacy concerns involve expectations of users—the privacy of the home versus a public space versus a hotel room.

“Users—as they should—expect privacy protections,” Lewis said. “LG takes individual privacy in the consumer and commercial spaces very seriously. Our consumer TV firmware, for example, has been encrypted with a digital signature attached to each partition and integrity verified during the TV booting process. This process has been extensively tested and certified by UL’s cybersecurity assurance program. Furthermore, LG’s end user agreements are among the most consumer-friendly in the industry because they are written in a natural language, require opt-in, and LG has separated the functions and features, which allows consumers to control the information being utilized by the TV. In the B2B space, LG intends to uphold the same commitment to end user security, and we’re keenly aware of the need for secure AI solutions both now and in future technological developments.”

Another example is when AdMobilize employs technology to distinguish between men and women or delighted and frustrated responses. Users may have concerns about their faces being captured and used in other ways, by other people or companies. So, ensuring people’s privacy is paramount to developing AI technologies, Saccoman says.

“With our analytics technology, everything we do there is anonymous,” he said. “The data the moment is captured, it’s converted into binary numbers, which is aggregated, and from that aggregation everything is anonymous. You have to always protect that, create mechanisms to allow people to have control.”

The recognition of technology’s impact on humans is now perhaps greater than it’s ever been, concluded Saccoman. “One has to be cognizant of 15 years from now—what will the power of this technology be? You want to use it in ways that help humankind.”