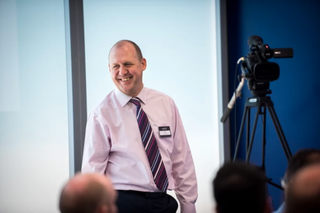 As the AV User Group touched down in San Jose for the first time in October, interest in the group has reached an all-time high, with countries all over the world wanting a piece the action. Chairman Owen Ellis discusses his plans and ambitions.

According to AVIXA, the Bay area in California is now the biggest in the county for audiovisual technology sales—surpassing even New York.

For the AV User Group—a non-profit organization formed in 1996 to help AV end user professionals network and share best practice advice—expanding to the Golden State wasn’t so much a question of if, but when.

“Ever since we launched in New York [in 2012], the demand for a group on the West Coast has never gone away,” explained AV User Group chairman, Owen Ellis, approaching his first year as a full-time employee at group.

In October, Ellis, after nearly a year of planning, headed to Google’s San Jose head office to officially launch the AV User Group in the region. Interest, he admitted was “incredible”.

As of this fall, membership numbers for the AV User Group (in total) have smashed past the 1,300 mark—double that compared to September last year. Of that figure, 350 of those (representing around 250 organizations) are from the Bay area.

“We’ve had some incredible interest since we announced our plans to launch in San Jose. It’s a very wide demographic ranging from education to large corporate organizations. It's a really good mix and a much higher number than we expected,” Ellis said.

Demand, according to Ellis, has been fueled by support from the industry, many (if not all) have worked with the AV User Group in its other regions (London, New York, Hong Kong) and value its importance.

So much so, Ellis claimed he could have sold the first show twice over, such was the interest. Shure, Logitech, Biamp, AVIXA, QSC, and Barco are sponsored and presented at the first event. Meanwhile, Extron, Tripleplay, Silicon Core, Mersive, Evertz, Dolby, Atlona, Electrosonic, AVMI, Diversified, and L3AV all sponsored the post event networking drinks.

Ellis also revealed the next scheduled meeting (Spring 2019) is already booked up (no venue announcement yet)—with Crestron, Lightware, Sennheiser, NEC, Avocor, and Avidex (local S.I.) all set to present. It also has a strong “first refusal” waiting list made up of Mersive, Atlona, Altia Systems/Panacast, Ashton Bentley, and Starleaf, should any drop out.

“It’s gone incredibly well, so far,” said Ellis. “San Jose has been a real success story in the sense it was the first time I’ve opened a location that I’ve never worked in before. When we opened in New York and Hong Kong, they were two locations that we ran the Morgan Stanley multimedia business from. So, I was used to traveling to both locations to manage my team. I knew the industry and had contacts there, so it was fairly easy to build. I didn’t have that luxury with San Jose and yet from the day we opened in New York, I’ve been asked when we are opening up on the West Coast.”

“The Bay area is number one for AV sales in the U.S., so it was obvious it was the right target, it was just building it. It was a very different angle from before and we were heavily dependent on our existing membership and sponsorship base, but I was amazed at the level of support we received from our sponsors and how keen they were to introduce their clients to us,” Ellis added. “It took me by surprise as I expected it to be a lot harder work. Knowing we have 350 members on the database, I would have been disappointed if we didn’t have 10 percent of those at the first event.”

By around 2020, Ellis said he hopes to be able to offer U.S. members the same level of support (i.e. accommodations) offered to those in the U.K. in attending major trade show events. In the U.K., that support is provided in getting members to ISE; whilst in the U.S., that would be its equivalent, Infocomm.

“I’d hope in the next couple of years we’ll be able to start doing that for both U.S. locations [Orlando and Las Vegas], so by 2020 we will hopefully have sufficient revenue to offer support in getting members to the shows.”

Demand for the AV User Group is not however restricted to the U.S., Ellis revealed. In recent months, fueled by its sponsors and activities in the market (including partnering with AVIXA at ISE), requests from end users all over the world have been received. France (Paris), Australia (Sydney), Canada (Toronto), New Zealand are just some of the options.

However, Ellis and the board are keen to ensure the value and reputation of the group is not tarnished by adopting a land grab rollout strategy. Groups, like in London in the early days, may begin life as simply networking opportunities amongst AV professionals, with potential sponsorship further down the like.

“When I sat down with the original management committee, one of my personal desires was to make something like the AV User Group available to as many end users in our industry as possible around the world over a period of time,” explained Ellis. “We’ve had some strong interest, and it’s been exciting having discussions with the board about how we go about that and grow the group further and scale. We’re very proud of what we’ve achieved and conscious that we don’t want to water that down. We’re also keen to protect the reputation we have built, but, equally, we don’t want to make it difficult for new locations to get started by setting some ridiculous criteria. We’ve not got that nailed down yet, but we’re close.”

“We always thought it would be us deciding where we should go,” he concluded. “But that’s been flipped on its side as people are reaching out to us. It’s a very exciting time for all of us.”