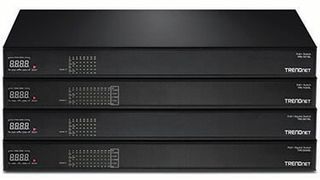 The What: TRENDnet recently announced the launch of its PoE+ AV Series Switch line. The new line of PoE+ AV switches is designed with a clutter-free front panel display, with no cables in the front, for convenient integration into existing AV equipment racks.

TRENDnet PoE+ AV switches are suitable for a variety of uses including in restaurants and bars with several TVs and monitors, large homes with a multi-room AV setup, and as part of a surveillance solution with an NVR. The new line features multiple models to fit varying needs, including an entry level model for basic AV setups as well as models equipped for long distance fiber optics networking.