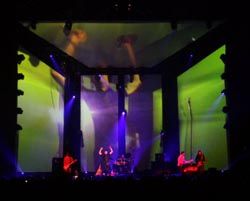 Says LD Brent Clark, "The DL.2 looks pretty cool and I was really surprised by the brightness and the edge blending. They are way brighter than I thought and creating the Collage( (using Collage Generator software feature) on 12 of them a day is actually pretty easy. Also to be able to move the image around from the band to the house to the rear screens is so cool. DL.2 is an amazing light!"

Concerning the overall set design, Clark says, "The idea was to make a box (relating to the CD title World Container) and then project images from around the world. We contracted a company from Vancouver called The Collective to film all the content, which is totally reality-based."

Mainlight Industries supplied the DL.2s to the tour's main lighting contractor, Christie Lites. Christie techs include Jason Lewis, Denis Lee and Scott McLaughlin. "Both Christie and Mainlight were fantastic in their support of this project," says Clark. "Both companies helped me out in so many ways and went the extra mile for me. It was an absolute pleasure to deal with them." The tour started in late January in Canada and runs through the U.S. until April 29. For more information visit www.highend.com.