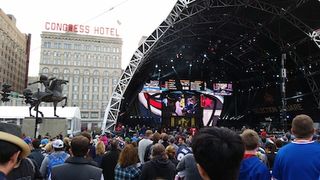 The NFL Draft descended upon Chicago’s Auditorium Theatre April 30 to May 2, and along with it came Draft Town: a 900,000-square-foot attraction in adjacent parks where fans could watch the draft and participate in related events and activities.

AV technology at Selection Square, where the entire third day of the draft was held.

AV equipment was everywhere, from the screens in the 32 individual team tents, where fans could watch the draft with their fellow fans, to the outdoor Selection Square, where the entire third day of the draft was held.

One of the more interesting applications could be seen in Combine Corner, where fans could test their skills at some of the same events used at the NFL Combine. At the 40-yard dash event, participants could race against a pre-recorded NFL star thanks to a 40-yard LED screen positioned right next to four lanes of fan participants.

The wireless technology timing the fans was provided by Fusion Sport, the provider of athlete assessment technology for the actual 40-yard dash at the NFL Combine. Derek Wester, Fusion Sport’s business development manager for North America, noted that this version featured a different setup than the actual combine. Instead of the Smartspeed Pro taking split times at the start point and the 10-, 20- and 40-yard marks for a single athlete as it does at the real combine, the fun-focused Draft Town setup merely displayed the final times for each of the four participants at the end of the dash. Many participants took pictures by the clocks featuring their times after they ran.

Fans line up to race a pre-recorded NFL star on the 40-yard-long LED wall.

In the races I watched, the LED screen worked as a nice touch more than serving as a major focus of the event. This was partly because the bright sun didn’t allow for ideal viewing conditions, and partly due to how slow the average fan was. In several minutes of watching people run, I don’t think I saw anyone break six seconds in the 40. So the pre-recorded NFL athlete quickly ran far out of focus past the live runners. In that respect, the LED screen did a great job of reinforcing just how athletic NFL stars are compared to the average person.

Throughout the Draft Town grounds, the AV technology on hand also supported the other interactive experiences while still providing fans numerous outposts from which they could see the latest draft news. As a Sports Video Group blog entry noted, NEP Festivals partnered with C3 Presents to supply 18 channels of content to more than 80 video screens and monitors throughout Grant Park.

Just outside the main Draft Town area, the city even had its iconic Buckingham Fountain lit up in different colors throughout the draft’s first round to represent whatever team was on the clock at that time.

The Draft Town events were free and the venue easy to get in and out of. The attractions and idyllic weather brought an estimated 200,000 people to the three-day event, which also included a Super Bowl Gallery of memorabilia and free concerts to conclude the festivities.

In the end, the event did a great job of turning the draft—something normally of interest only to hardcore fans—into a festival-like atmosphere the whole family could enjoy. At the same time, the AV support still gave draftniks access to all the real-time NFL news they could want while they enjoyed a walk in the park.

Chris Gelbach writes on diverse topics that include careers, marketing, the AV industry, and recreation management.