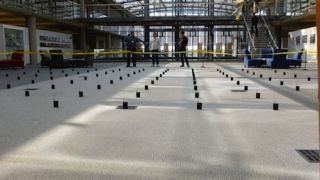 When a party of 10 claims a reservation for six at a crowded restaurant, there are two choices. Either everyone goes away hungry, or the restaurant finds a way to accommodate more people at a single table. Shure Incorporated has figured out a way to do the latter—on an exponential level.

Well, friends, I was there, and I watched while white-gloved Shure engineers diligently set up 100 ULX-D transmitters in a precisely organized grid across the floor, tempting fate further with the extremely close proximity of each device. A spectrum analyzer displayed on a large flat screen showed us how populated the frequency was becoming as all those little mics tried to get into the same space in the air around us.

Then, with all 100 channels operating flawlessly in what amounts to one heck of a crowded phone booth of spectrum, Vaveris took one of the mics for a walk well beyond the 30 meters spec’d by the manufacturer. From at least twice that distance, we could still understand every word he said, with just an occasional sonic blip here and there.

It was a spectacle unlike anything I have ever seen, and while my jaw was still dropped, Lyons casually mentioned that Shure is also adding Dante digital networking to the mix. Because, what the heck, why not just make digital all about having 100 people over to the party and make it easier for them to talk to one another.

Imagine not being able to talk about this demo for one whole month before InfoComm. Now you know what my life was like for the past four weeks. But now I can declare the truth in all its official Shure Incorporated press release glory. The official facts follow, but when you read them, just try to imagine a single rack crammed with 100 wireless receivers in front of a stage set with 100 transmitters. I’m pretty confident the technology does what this news release says it does. Now go to the Shure booth (C10108) and find out for yourself.

"ULX-D has already set a new bar for audio quality, spectral efficiency, and features with its intelligent rechargeable batteries and AES256 encryption," said Erik Vaveris, category director for wireless products at Shure. "The addition of full-rack dual and space-saving quad-channel receivers provides customers with professional form factors and an amazing list of new features and enhancements."

The dual and quad receivers add two new features that make using a large number of systems not only possible, but simple. Selecting High Density mode enables up to 47 ULX-D systems to operate in just six MHz of spectrum (equal to one U.S. television channel), with a working range up to 30 meters. High Density mode optimizes the system's output power and digital RF filtering to reduce its spectral footprint from 350 kHz to 125 kHz, with no loss of sound quality. This lets ULX-D systems be tuned to frequencies that are much closer together without interfering with each other. Even in Standard mode, up to 17 ULX-D systems can operate in six MHz.

The ULXD4D and ULXD4Q receivers are also equipped with integrated Dante digital audio networking, which enables multiple channels of audio to be distributed to a variety of devices over a single Ethernet cable, including Yamaha's new CL Series consoles. Dante networking provides reliable, low latency audio transport, and can coexist safely on the same network as IT and control data. Shure has executed a licensing agreement with Sydney, Australia-based Audinate for the Dante digital audio networking technology.

Launching the dual and quad receivers at InfoComm makes perfect sense because their feature set is so well suited to the needs of systems integrators. Starting with ULX-D's remarkable audio and RF performance, adding Dante Digital audio networking provides a great way to simplify set up while also increasing flexibility in installed sound systems. Include features like bodypack frequency diversity, a reliable and intelligent rechargeable battery system, and digital encryption, and you have a wireless microphone system that can meet the needs of just about any sound reinforcement application.