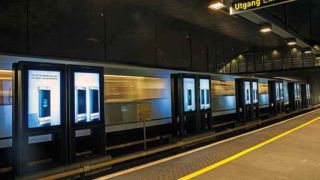 The convergence of audio and video with control systems is shifting both the role and potential of AV technology in transportation facilities.

By changing up the content mix, transportation centers have an opportunity to engage audiences that are already conditioned to separate advertising from informational content.

From the control room to the concourse, the integration of AV into IP networks—traditionally the domain of IT managers—is changing how transportation facilities communicate with passengers. While in the past AV was limited in its ability to reach transportation audiences in real time, now the industry is embracing the benefits of full-scale convergence.

“If you’re talking about transportation, you are in a situation where you need to deliver a coherent and consistent message for all possible channels, which means being able to deliver the same types of messages to displays, voice channels, and mobile phones,” said Petr Otoupal, managing director and co-founder at Simpleway, a unified passenger communication platform.

Real-time supervisory control and data acquisition (SCADA) technology has enabled AV control rooms to embrace automation, allowing managers to drive content throughout the facility. And having content and control on one standard, along with low bitrate streaming, extends the AV footprint to wireless devices.

“Video walls can now support massive amounts of streaming video sources, and all AV routing can be done at low bitrates over standard IP,” said Samuel Recine, director of sales, Americas and Asia Pacific, at Matrox. “High-efficiency encoding has allowed for cost-effective transmission of audio-visual streams over long distances—even between facilities located anywhere nationwide or around the globe.”

The transformation of communication opportunities has evolved from pre-loaded advertising to real-time data such as gate schedules, weather updates, and news headlines. By changing up the content mix, transportation centers have an opportunity to engage audiences that are already conditioned to separate advertising from informational content.

“People tend to stop looking at digital signage screens when the content is repetitive,” said Recine. “However, with a live video feed as part of the IPTV screen, the ability to use the digital signage infrastructure to share information with passengers is cost effectively enhanced.”

AtlasIED unifies public address and emergency voice/alarm communications systems (EVACS) under one networkbased infrastructure with the Globalcom system, providing high intelligibility, automation, monitoring, and system management. The system has been deployed at the Dallas-Fort Worth International Airport, one of the nation’s largest and busiest airport hubs.

With such tools at the integrators’ disposal, engagement is emerging as a quantifiable objective. Advertisers looking for ways to engage passengers are exploring opportunities for interaction through digital signage, kiosks, and personal smart devices.

“Kiosks that can link to different media provide a flexible way for passengers to self-serve between information and entertainment,” said Recine. “Alternatively, the same high-efficiency, low-bitrate video and audio encoders being used to power digital signage infrastructures can also be used to feed passengers’ personal devices like tablets and phones.”

IP-based communications and control solutions provider Barix has released its Audio Signage technology, for example, which allows users to hear audio from a digital signage screen by scanning a QR code linked to that display with a mobile device. Captive audiences—such as those using transportation systems—are a main target.

“This has found its way into buses, for example, where people now can listen to the digital signage if they choose using their own mobile devices,” said Reto Brader, VP of sales and marketing at Barix. “As audio signage technology gives a voice to the digital signage screen, it has become popular within waiting areas in transportation centers.”

Interactive technology is now going beyond pushing advertising and editorial resources, though, to get to the core of travelers’ needs—getting from point A to point B in as efficient a manner as possible. Digital signage that incorporates wayfinding tools helps passengers by providing quick and easy access to destination information on large and localized scales.

“With the integration of data-rich programs like Google Maps, transit APIs, and other available systems, we can show public transport lines, update maps, and even follow stop schedules in real time,” said Eric Henry, vice president at Tightrope Media Systems.

“Once people begin leveraging the interactive elements of wayfinding-based signage, they tend to access other elements of the program beyond mapping—information buttons that provide additional detail on a service or location being one popular element—which holds their attention longer.”

Taking the concept a step further, Simpleway is working to incorporate passenger demographics to deliver relevant content through digital signage, and to make sure the content is understood. For example, the signage in a baggage claim terminal could display the language spoken by the bulk of the passengers on a particular flight. If a flight arrives from mainland China, Otoupal noted, the signs could switch to Mandarin.

“Direct data integration between digital signage software and external feeds simplifies the content creation and management responsibilities for the transit agency,” said Eric Henry, vice president at Tightrope Media Systems, “and presents a cleaner and more engaging look and feel for the passenger who has limited time and attention to identify the information he or she needs.”

Wayfinding can also play a critical role in crisis communication systems in transportation applications, by linking together a traditional P.A. passenger information system with its digital signage for use in an emergency.

“Look at a situation where a fire starts somewhere,” said Otoupal. “The ability to switch that [digital] sign into one which shows the nearest emergency exit and potentially saves lives—it should be a no-brainer.

“All those things can be completely dynamic,” he added, “but you need automation to tie them together. As you have these dynamic signs and dynamic elements, that’s a lot of digital inputs to manage. That requires you to have systems work together to solve the situation.”

On the client side, as well, the convergence of audio and video with control systems, augmented by technologies like wayfinding, has clear benefits that integrators should heed.

“Direct data integration between digital signage software and external feeds simplifies the content creation and management responsibilities for the transit agency,” Henry said, “and presents a cleaner and more engaging look and feel for the passenger who has limited time and attention to identify the information he or she needs. This will ultimately reduce stress levels for the time-sensitive traveler.”

Since happy travelers are inclined to travel more often, embracing automated AV systems should also be a no-brainer for facilities looking to grow along with their passengers.

Jim Beaugez, APR, is a freelance writer and accredited communications professional with a decade of experience in the MI and pro audio industries. You can reach him at jimbeaugez@gmail.com and on Twitter @JimBeaugez.