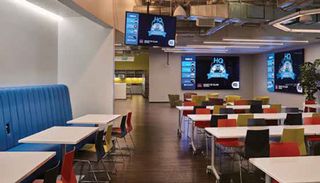 Software company Rocket Fuel recently moved into a new headquarters which features a conference center with more than 50 meeting rooms, each equipped with Crestron technology. Think of it as the Tyrannosaurus Rex of AV projects. Because in the world of AV ventures, a mega project—one of those huge, campus-wide undertakings—has the potential to make or break an AV firm’s entire year.

“We regard a mega project as being a campus-wide educational installation or a corporate campus project, something that is looking for a network system,” said Bob Sharp, director of international sales, SVSi, Harman Professional Solutions. “This is defined by one big, facility-wide network rather than small, individual systems that may repeat 100 times. Those may be considered mega systems financially, but our mindset is that mega indicates one converged network. A few years ago, very few SVSi projects were on converged enterprise networks, but now we’re seeing that 20 to 30 percent are this way.”

Get the design right initially, stressed Dave Howden, director of technical services, Community Professional Loudspeakers. “This will minimize change orders and reduce scope creep, and it applies both to design/build and design/bid/build projects.”

Manufacturers know their products and can help in the design process, he added. “Community, for example, will offer product selection assistance and will review designs and offer suggestions on things like DSP settings and OEM, or third-party flyware.”

Howden suggests getting manufacturers to do any needed customization at the factory, and giving them a reasonable lead-time. “It’s costly and time consuming to paint cabinets, rotate horns, or otherwise customize products on the job site. Community offers configureto- order options on many of its products for this reason.”

With these large projects, room standardization may be the key. “Different room types, such as huddle rooms, conference rooms, and collaboration spaces, etc., need to be easily repeatable and supportable,” said Linda Pennington, senior regional sales manager, Crestron, Southwest. “Every room is not a ‘Picasso’ that requires a customized design. You will have those spaces, such as the C-level conference room or NOC, and you can use your paintbrush on those types of rooms. Otherwise, the remaining 80 to 90 percent of the project needs standardization.”

It’s important to have one programmer for the entire project, she suggested. “For example, we worked with a dealer whose client hired one company to do the programming for an entire 20-plus building project. They knew that standardization of the hardware and software was imperative. The people who would be using these rooms had to have continuity in the GUI, and it had to be easy to use. Although there were three AV integrators on the project, there was one look and feel to the control interface.”

The ‘Active Learning Classrooms’ installation at UT Southwestern Medical Center in Dallas is an example of a mega project and features technology from SVSi. Should there be more than one integrator on a mega project, it’s advisable to have a “master AV dealer” to define rack standards, wiring, documentation, etc. for all participants. “This results in rooms/equipment racks that are standardized and implemented correctly across the enterprise, regardless of who the integrator is,” Pennington said. “Limit the number of manufacturers in the overall design. Supporting 50-plus manufacturers’ products in a large project is insane.”

Pennington has seen projects where there are so many different manufacturers represented in the equipment rack that it looks like an AV garage sale. “How do you begin to support that?” she asked. “Where do you begin to troubleshoot? What items do you then recommend the end user put on the shelf for ‘spares’? Streamline the design, and you streamline the installation time.”

Often in a university environment, the project is for a refresh and upgrade. “In that case,” Sharp explained, “the network may have to be upgraded first to accommodate AV. The role of the integrator here is to provide the proper information and requirements, so the upgrade can proceed smoothly. So again, that cooperation in the spec stage is vital for the AV to be successful.”

On mega-sized projects, like the Daytona International Speedway, manufacturers know their products and can help in the design process. Community, for example, will offer product selection assistance and will review designs and offer suggestions on things like DSP settings and OEM, or third-party flyware.Don’t Let Your Scope Creep

A good project manager is worth his or her weight in gold, literally, Pennington said. “This person has to have the people skills to communicate well with the client when they see a potential for scope creep. He or she needs to relay the ‘if/then’ clause to the customer. For example: ‘If I add this feature to the design, it will then add X amount to the overall cost and time of the project.’ These changes should always be documented and signed by the dealer and end user as a change order. I’ve also seen dealers who will add features to the scope only after the original project is completed. The project manager must also manage the team and make sure that everyone is covering the bases as they should.”

Where SVSi sees scope creep is where good groundwork wasn’t properly established from the beginning, Sharp noted. “In that case, you find out too late that the uplinks between switches are not sufficient to carry the amount of data for the AV, so you have to replace or add more fiber. Make sure, in the early discussions, that you are designing and installing a network capable of the AV requirements.”

On the programming side, he said, scope creep is caused by the programming of control systems where the level of programming needed to accomplish what the client wants has been underestimated. “A common misstep is underestimating the level of project complexity. If you’re looking at an individual classroom, it’s fairly cut and dried. But if a client tells you at a certain point that they might possibly want to share a video stream to an overspill room across campus, and that work hasn’t been defined, it can be very complex to figure out. It’s not that the hardware can’t accommodate, but it’s complicated from the programming user-interface perspective. And that costs money.”

Stick to Your Standards

Remember that these mega projects will not go well if there are no room standards, Pennington cautioned. “How else will you be able to efficiently install, troubleshoot, and train on the system? You can’t.”

And make sure that all members of your integration team are completely trained on the products they are installing. “That includes any subs that the dealer may be using,” she said. “One misstep is not allowing for challenges that may arise on the project that will affect profitability.”

Here’s something you can depend on: There will be unpredictable challenges in your mega project. The trick is to be well prepared.

“You can be assured that there will be curveballs thrown,” Crestron’s Linda Pennington said. “However, you can’t let a strikeout ruin the whole game for you. You must have players who can cover more than one position. Flexibility is the key. This allows for more options when you are forced to alter the game plan.”

For networked AV, front and center, it’s most important to engage with the network contractors and consultants as early as possible, emphasized Bob Sharp of SVSi. “If you try to bring everything and everyone together at the final point, you won’t be successful with these big campus-wide deployments. You must be deeply engaged, and on the same page, with the engineers and designers working as a team. The 11th hour is where there have been problems. We don’t want to find out at the last minute that the client expected to stream video to another building and that we have not spec’d the correct equipment. If that expectation wasn’t previously discussed, the ramifications make it difficult because we may not have the right network infrastructure.”

The importance of versatility and expandability of networked AV installs cannot be overstated, he stressed. “As an integrator or consultant, you have to make sure you understand the customer’s expectations, so there are no surprises at the end. When an installed network is not capable of doing what the customer expected, you then have to beef up that network, which costs money.”

There is an inherent challenge in promoting the idea that a system is infinitely expandable, although it also opens a lot of opportunities, Sharp noted. “Avoid misunderstandings by asking, ‘What does that really mean?’ We know what we mean, but the expectation of the facility may be out of line with reality. If a consultant is involved, they, too, have to understand these expectations for future expandability. Again, we are very open to saying, ‘Bring us into the discussion as early as you want to advance ideas about what the client might want.’ We’re happy to discuss it and tell you the truth. Since we promote expandability as value added, we must properly communicate these expectations.”