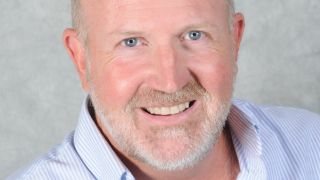 From his perspective as an industry veteran of more than 30 years, Clint Hoffman is more excited than ever about the future of the AV industry because he feels major change is imminent.

"We’re on the precipice,” Hoffman said. “For a long time, there have been a few big companies that have dominated the scene. Nothing wrong with that. But with the move toward everything becoming network-driven, there’s going to be a lot of innovation coming from many smaller companies. That’s good for everyone.”

He knows a thing or two about change. From his early work with Mitsubishi guiding Northeast regional sales of such products as the 35-inch auto-scan monitor to his current role as chief operating officer and chief growth officer at Kramer Electronics U.S., he’s been a vital part of the electronics evolution.

Sometimes, the evolution has thrown some challenges his way. While marketing CRT projectors back at Sony, he and his team noticed other new products significantly cutting into their sales. It was a sobering moment that required some out-of-the-box thinking. So, Hoffman invited their top 50 dealers and their significant others to Florida for a special meeting.

“We were honest with them; we admitted we hadn’t gotten things right,” Hoffman said. “Then, we showed them our plan on how we would get back on track, asking them to stick with us. The plan was very strong. They stuck by us, and we put the plan in motion. Soon, we were in good shape again. I think they felt us admitting no company is 100 percent all of the time was a bold move. That, and our plan was rock solid.”

He credits his long-time mentor, Dave Bright, with instilling some of his leadership and passion for the industry. Hoffman worked for Bright at Mitsubishi and then followed him to Kramer. All told, they worked together for 25 years before Bright retired in December 2016.

Hoffman recalled, “He was just a great boss, and I’m happy he’s really enjoying his retirement. I learned a lot from him, and I certainly got some of my leadership from him. What I think I bring to my role is empowering my team, helping them find their own creativity. I try to lead by example, and sometimes that means rolling up my sleeves and getting in there.”

For instance, taking the reins on Kramer’s lead-generation videos has been enormously successful. Frustrated by the lack of real measurement from an advertising-only spend, Hoffman began to heavily rely on how-to videos for the company’s YouTube channel.

“At first, we hired an outside production company. It was pretty expensive,” he said. “We got okay results. But then, I figured we can do this ourselves. So, we built a studio on site, got the equipment, and went for it.” You’ll even see Hoffman in some of the videos, undoubtedly a nod to his TV/broadcast/film communications degree. Realizing that getting a toehold in those industries is tough, he opted for the next-best thing. It’s still about communications and being at the forefront of the ever-changing industry keeps him going.

With the aforementioned move to network capabilities, wireless, collaboration, and AV over IP, Hoffman and Kramer are all over it.

“We’re very excited about the data analytics capabilities that are part of our control solution,” he said. “And with everything moving toward networked solutions, we have encoders/decoders that use existing IP highways in buildings. We are the point where the quality and price of AV over IP makes it an ideal choice over the closed systems we have historically designed and sold.”

Outside of Kramer, Hoffman’s participation with AVIXA reflects his drive and passion for the industry. He’s determined to change the conversation and promote greater visibility for everyone involved in AV. He cites the old joke about someone in AV being at a family function or a party and being asked what he or she does. “No one really gets what we do,” Hoffman said. “And I want to change that.”

His leadership and passion extend to participation in municipal government in his home of Wall Township, NJ, where he has served on the township board and did a yearlong rotation as mayor during which he led the township meeting, attended ribbon cuttings, and performed wedding ceremonies. “I can perform nuptials for the rest of my life. In fact, this past Saturday, I presided over the wedding of one of my Kramer colleagues. I really enjoyed that,” he said.

What else does Hoffman enjoy? Taking care of his two acres of property. No lawn service for this guy; he mounts his trusty riding mower and has at it. In fact, during this interview, he looked out the window at the falling leaves and knew he had some work to do.

When not mowing acreage or rebuilding the fences that encircle his property, Hoffman enjoys married life with his wife of 27 years, Judy. Two children, Jennifer and Rich, and six grandchildren also keep him happily busy.

After all, being busy is something Hoffman is intimately acquainted with. With his unstoppable energy and dedication, chances are good the punchline to that old joke about working in AV is about to be rewritten.